An image of hundreds of birds flying over a soviet-era war memorial in the Ukraine has been voted as Manchester’s best Image of Research. 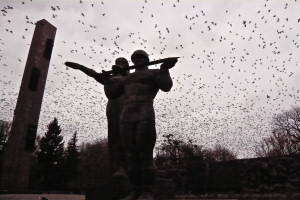 Members of the public chose Benjamin Tallis’s “Borders Beyond Borders” as their favourite out of 15 stunning photos taken by researchers at The University of Manchester.

The PhD researcher from The School of Social Sciences submitted the photo to raise awareness of the consequences of borders and how they’re controlled.

Benjamin says: “We should rightly celebrate the enhanced freedom of movement that the removal of frontier controls across Europe has brought about. I benefit from it directly when I’m conducting my research, travelling between Poland and Czech Republic. But we should also be aware of the other consequences that it has, particularly for those people, such as Ukrainians, who live outside the Schengen zone.”

Talking about when he took the photo Benjamin recounts: “I arrived at the monument mid afternoon on an early December day, with a bitterly cold wind whipping around the open space between the statue and the military academy across the road. I wandered around for some time and was returning to the car as the light began to fade. As I was about to leave, I heard an amazing sound; thousands of starlings exploding out of the trees behind the monument, streaking the sky in swirling black swarms. I snatched my small point-and-shoot camera from my pocket and snapped away. It was just a case of being in the right place at the right time, but it was an amazing feeling that brought home the significance and drama of the place.”

This is only the second year the Images of Research competition has been held. The standard was very high and there was a wide range of subjects on display from the inside of a tadpole’s head to lightning striking the blade of a windmill and a Colombian coffee grower talking on his mobile phone.

All the images were on display in the John Rylands Library in Manchester city centre and on a dedicated website. Members of the public were asked to vote at the exhibition and online.

Benjamin says he was honoured to be chosen as the winner: “Winning this competition means a lot as it was voted for by the public, showing that people are interested in and want to know more about this region. This can only help break down the borders that mean the accident of birth determines who can travel freely and who cannot.”

This year’s theme was “Making a Difference”. The images demonstrated how research being carried out at The University of Manchester is affecting the wider world and benefitting society.

Benjamin says of his research: “The rationale for my research comes from my professional experience of working for the EU in the Balkans and former Soviet Union. I worked as a political and strategic advisor on security and border missions and wanted to gain a deeper understanding of the situations that I worked in and provide the basis for influencing better policy outcomes. Becoming a researcher provided the possibility to take look at and think differently about the situations that I was concerned about, while my professional experience and continued involvement in the region means that my research is firmly connected to real-life situations.”