A Congolese aid worker who survived a massacre in which seven of his colleagues were killed has had his arm rebuilt in the UK thanks to the plea of a University academic who worked with him. 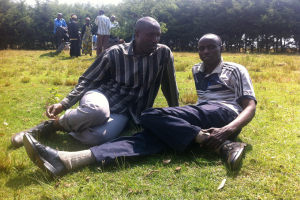 Pastor Antoine Munyiginya was travelling with co-workers from Eben-Ezer Ministeries, a local NGO funded by the British Charity Children in Crisis, when their vehicle was ambushed on route to the town of Minembwe on 4 October last year.

Antoine, left for dead after the attack, had been shot three times in the arm.

The acclaimed programme where he worked trains teachers and builds schools, using theatre workshops to role play issues of violence, reconciliation and attitudes to women.

James Thompson, a Professor of Drama at The University of Manchester and Director of In Place of War -  which researches theatre and performance in sites of armed conflict-  has worked with the team in the Congo.

After visiting Antoine in hospital in neighbouring Burundi, Professor Thompson arranged through Professor Tony Redmond and colleagues in the Humanitarian and Conflict Response Institute, for him to be treated in the Alexandra Hospital in Cheadle.

Since arriving in Manchester last November, Antoine has been living with Professor  Thompson and his family.

Professor Thompson said: "We are delighted to have the opportunity to host Antoine who is a remarkable man.

“He has been through an appalling tragedy, but I’m delighted by the response of our friends, neighbours and colleagues, who have been so supportive.”

Two surgeons, Waseem Saeed and Adam Watts, performed a seven-hour operation to ensure the charity worker would be able to use his right arm again.

Sarah Ferguson, Duchess of York and founder of Children in Crisis, visited Antoine, who is recovering from the surgery and thanked the surgeons.

Professor Thompson added: “As recently as July last year I actually travelled that same road with some of the people who were killed -  so it was a huge shock when we learned what had happened.

“Many of the victims were their sole breadwinners of their families. Anyone who wishes to donate to our appeal for them should call Children in Crisis on 020 7627 1040 or email info@childrenincrisis.org."