An anthology of poetry by one of Latin America’s most acclaimed writers has for the first time been made available to English speakers thanks to academics at The University of Manchester. 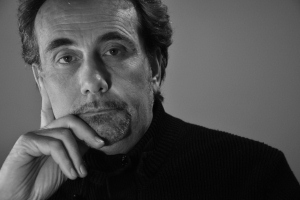 Argentinian Cristian Aliaga is recognised as one of his country’s outstanding contemporary writers and has published more than a dozen books of poetry in Spanish.

He will launch the book with a reading his poetry in Spanish and English at the University today (23 November).

His bilingual anthology La causa clínica/The Clinical Cause  was published as  part of a poetry series by the University’s Spanish, Portuguese, and Latin American Studies department.

Though some of his poems have been individually translated, this is the first time an entire book has been published in English

The poet, writer and journalist based in Patagonia, is known for his cultural activism, and editorship of the pioneering newspaper El Extremo Sur (The Extreme South), which supports support the arts in the region.

A major inspiration for The Clinical Cause  comes from his unpublished book, The fall up, which examines the experience of pain and torture in his country.

He said: “Though my writing is about the search of a link between poetry and politics, I think it’s important to maintain a reference to the experimental and avant-garde.

“Patagonia contributes a lot to Argentina’s  balance sheet – it's an area rich in fossil fuels. But Buenos Aires is where the resources end up-  hence my work promoting the cultural scene in this region.

“It’s great that Manchester University has published The Clinical Cause: Universities are one of the few spaces left for this kind of writing and poetry in Spanish has very little visibility in the English-speaking world, except for one or two big names.”

Dr Esther Gomez-Sierra, from the University’s Spanish and Portuguese Studies said: “This publication was a labour of love: we feel strongly that poetry lovers should have the chance to read this most important writer.

“The Spanish speaking world has much to offer– and we are delighted that as a university we are doing our bit to make at least some of this work available.

“We are honoured and thrilled to be able to do that for Cristian’s work.”