A fourteenth-century Jewish masterpiece, painstakingly preserved by experts at The University of Manchester’s John Rylands Library, is launched on iPad, iPhone and iPod touch this week. 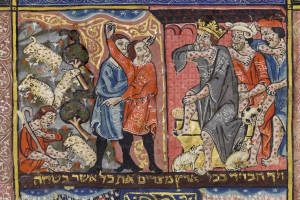 The Rylands Haggadah, currently a centrepiece at a Metropolitan Museum of Art exhibition in New York, is now available as a narrated facsimile thanks to the Rylands’ digitisation team.

The manuscript has been digitised using state-of-the-art technology by specialist photographers at the world famous University of Manchester library.

It depicts episodes from Exodus onward, starting with the call to Moses and ending with the crossing of the Red Sea.

As an added bonus, the text is also recited by Rabbi Shlomo Ellituv, Minister of the Spanish and Portuguese congregation in Manchester.

The Haggadah, which was produced in Catalonia, was sold by the 25th Earl of Crawford to Enriqueta Rylands, the founder of the John Rylands Library in 1901 as part of the world famous Crawford collection of manuscripts.

Dr Yaakov Wise from The University of Manchester’s Centre for Jewish studies said: "The Haggadah is one of the central texts of Rabbinic Judaism. Its use on the first nights of Passover by Jews all over the world from Alaska to Zimbabwe continues a tradition over 3,000 years old.

“It connects the Jews of this generation to their ancestors who left slavery in Egypt for a life of freedom in their own country and is the story of the first national liberation movement in history.”

He added: "Though Orthodox Jews will not be able to use this book during the Passover ceremonies, it's a valuable resource for anyone who wants to learn more about Jewish culture.”

Rylands Collections and Research Support Manager John Hodgson said: “This manuscript is one of the finest Haggadot in the world.

“It is important for its intrinsic beauty and for various textual details, but it is also a key source for the study of the illumination of Hebrew manuscripts in general.

“It shines a light on the tradition of Biblical illustration among the Jews of the Middle Ages and on the cross-fertilisation between Jewish and non-Jewish artists within the medium of manuscript illumination.

The Rylands Haggadah is among the top ten individual items of greatest significance within the JRUL’s Special Collections, in terms of its research, cultural, heritage and financial value.”

Conservator Steve Mooney spent eight months securing the areas of pigment and gold leaf which had started to crack and flake.

To maintain the high level of concentration needed, Steve could work on the manuscript for only two to three hours a day, viewing the damaged areas under a microscope.

"We're delighted to be working with the John Rylands Library on this project.
“It's always a privilege to work with books of this importance, but in this case the recording of the book adds another dimension that really brings the book to life."

The Rylands Haggadah is available at £4.99 from the iBookstore on iPad, iPhone and iPod touch or at www.iTunes.com/iBookstore