Researchers at The University of Manchester are to record the history of the region’s only established Yemeni community – in a project which starts this summer. 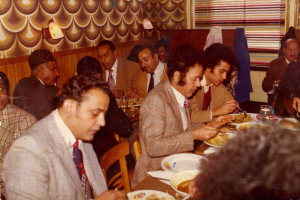 The University’s Ahmed Iqbal Ullah Education Trust will work with the Yemeni Community Association (YCA) in Greater Manchester - based in Eccles - and The University of Salford to set down the memories of some of its members across the generations.

The project, funded by a £49,000 Heritage Lottery Fund grant, will collect their life-stories relating to the migration and settlement of Yemeni pioneers and their accounts of building a community in Britain.

It will explore historic firsts such as the first Yemeni café, the first Eccles Mosque, the first Halal butcher in Eccles- and look for historical documents about the community.

YCA Chairman and HMP Muslim Chaplain, Gadri Audhali said the project will be an important way to make other communities aware of their contribution to the nation.

He said: “Since Yemenis fist arrived in the UK - which was in the second half of the nineteenth century  - we have made huge sacrifices for the country – especially in the Navy during the first and second world wars.

“We usually did the heaviest and most difficult work on those ships. Many died but outside and even within  our community, so few know about it.

“Hopefully, this project will change that.”

“Sometimes we feel as though we are invisible.”

Since the Yemenis arrived in Eccles in the 1940s, they have made an important contribution to the region’s economy, working in steel, cotton manufacturing, engineering and other industries.

Linked to the first UK Yemeni communities in Cardiff and South Shields, there are currently up to 800 families in Greater Manchester, with the Eccles community at its heart.

Project leader is Jackie Ould of the Ahmed Iqbal Ullah Education Trust, which is based in the Race Relations Resource Centre, one of the University’s ‘Cultural Assets’.

She said: “These records will be archived at the Ahmed Iqbal Ullah Race Relations Resource Centre, so that the history of the Yemeni community in Eccles is preserved for future generations.

“We are delighted that the Heritage Lottery Fund award will allow us to work with the community to capture their history.”

A strand of reminiscence through art will also run through the project, allowing for less traditional ways of expressing and recording the community’s history.

Other project outputs will include a website, a poster-display and teaching materials to promote better knowledge and understanding of the history of Yemeni people in Salford.