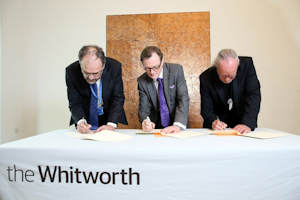 Manchester, Salford and Manchester Metropolitan Universities are teaming up in a new initiative to combat dementia in the region and beyond.

Leading researchers from the three institutions met at the Whitworth to open a series of collaborations around a range of dementia issues – from biology to social care – to mark Dementia Awareness Week (May 15-21).

It comes as the Greater Manchester region begins to synchronise its health and social care provision under the so-called DevoManc agenda, enabling the NHS, local authorities and research institutions to work together on more co-ordinated approaches to improving the health and wellbeing of local people.

Professor Nigel Hooper, The University of Manchester’s lead for dementia research said: “Together the three universities in the region are much stronger than the sum of their parts. The highest rates of dementia in the country are in North West England, so working together like this on dementia brings different experts, networks and resources to bear on making a positive difference to those living with dementia, their carers and families.”

Here on our campus, this includes projects to identify new targets in the brain for drug development. Researchers also work on the crucial issue of early diagnosis by looking for molecular clues – known as biomarkers – in the body that warn of the early stages of dementia.

Developing strategies to live well with dementia is a particular focus of interest with projects providing music therapy and researchers working with carers. All of this is underpinned by the use of ‘big data’ to gather insight and test the effectiveness of research.

At Salford, research includes projects on artificial intelligence that supports people in their own homes, the most effective forms of support for BME communities and a project aimed at better meeting the day-to-day needs of people living with young onset dementia.

Manchester Met will be researching new ways to protect the brain against stroke-associated dementia by stopping harmful post-stroke proteins. There is also a keen focus on promoting independent living in people with dementia. This week, the University launches a new project analysing GPS-enabled wristbands that can cut social isolation.

In what will be known as the Greater Manchester Dementia Consortium, the new memorandum of understanding will run for an initial two years.