Medals of Honour for TV champions

Manchester’s title winning University Challenge team were honoured by the University at the Cockcroft Rutherford lecture on 11 June. 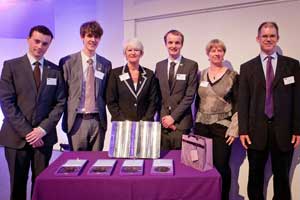 The four team members received Medals of Honour, the University’s highest level medals. During the presentations, coach Stephen Pearson, who already has a Medal of Honour, was also acknowledged for his magnificent achievement of mentoring four winning teams in just eight years.

The 2013 team beat University College, London in this year’s final and the four team members received their medals at the prestigious Cockcroft Rutherford Lecture.

The lecture was delivered by Professor James Thompson, Professor of Applied and Social Theatre and Executive Director of the Humanitarian and conflict Response Institute.

Professor Thompson spoke about In Place of War, a research initiative at The University of Manchester that documents theatre and performance projects in sites of contemporary armed conflict.

He outlined the beginnings of the project in Sri Lanka in 2000 and the questions that the research project has sought to answer.

Professor Thompson is Director of In Place of War and Associate Dean for External Relations in the Faculty of Humanities. He has researched and developed arts projects in conflict and disaster zones internationally and is author of a number of books on theatre and performance.