Portcullis House at the Palace of Westminster provided an appropriate setting for the recent launch of the Politics and Modern History (PMH) Network. 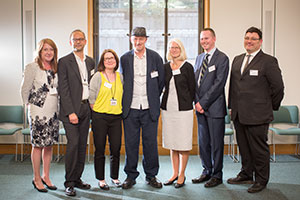 The Network aims to engage successful alumni of the BA (Hons) Politics and Modern History degree programme with the University’s research and its current students, to share advice and expertise.

The launch event took place on 5 June and was hosted by the Chancellor, Dr Tom Bloxham MBE, and Jonathan Reynolds, MP for Stalybridge and Hyde, who are both graduates of the degree.

Initiated by the Chancellor, the launch of the group was developed by Professor Fiona Devine, Head of School of Social Sciences, and organised by the Alumni Relations team within the Division of Development and Alumni Relations.

Both the Chancellor and Jonathan Reynolds spoke about the impact of their time at Manchester on their subsequent success, with Jonathan mentioning how content and assignments from his degree have proved invaluable in meeting some of the challenges he has encountered in his political career.

The event was attended by 60 guests, most of whom had graduated in Politics and Modern History between 1966 and 2012 and were now working in a host of professions. Also present were members of staff from the School of Social Sciences and Arts, Languages and Cultures, who included Professor Jeremy Gregory, Professor Hannah Barker, Professor Andrew Russell, and Catherine Tansey.

The event was very well received by guests, and several alumni have volunteered to share their advice and expertise with prospective and current students, making a key contribution to improving student experience and recruitment.

Tom Bloxham said: “I’m delighted to see the PMH Network established; it’s an idea that I’ve thought for some time would be extremely valuable not only to graduates of the degree, but also the University as a whole, and its students.

“Since completing my PMH degree some 27 years ago, I regularly come across PMH alumni in the most extraordinary places: MPs and ministers, journalists and editors, those running think tanks, charities and hedge funds, photographers and property developers, civil servants, lawyers and teachers.

“I hope that the Network will provide the opportunity for alumni to share their advice and expertise with current students.”