80 physicists gathered in Manchester on April 6th and 7th to discuss the future of a CERN Large Hadron Collider (LHC) experiment. 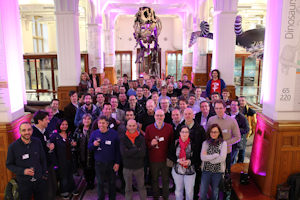 LHCb is the dedicated experiment at the LHC looking at matter antimatter differences. LHCb is currently constructing a second generation version of the  experiment, the upgrade, which will be installed in 2019/2020. Major elements are being designed and constructed in Manchester. Frederic Teubert of CERN and co-organiser of the meeting explained “We entitled the meeting ‘Theatre of Dreams: Beyond the LHCb Phase I Upgrade’, and this was the first workshop on exploring the longer term future of the experiment so that the flavour physics potential of the LHC can be fully exploited”.

In the mid-2020s the LHC will be upgraded for higher intensity LHC operations and significant upgrades will occur to other experiments, including the ATLAS experiment where UoM is also heavily involved. These works will necessitate a long-shutdown of at least 2.5 years duration. The meeting discussed enhancements to the LHCb experiment, dubbed a Phase Ib upgrade, that could be installed at this time. These improvements could bring significant physics benefits to the experiment.

Around 2030 the LHCb upgrade experiment that is currently under construction will reach the end of its foreseen programme. At this time a major new project, a Phase II upgrade of the experiment could be foreseen. The experimental physics programme, the theoretical perspectives, and the anticipated reach of other experiments were considered.  The goal would be to collect significantly more data with an instantaneous intensity of particle collisions a factor ten above that in the upgrade that will operate in the 2020s. Promising scenarios for LHCb from the LHC accelerator were shown which would potentially allow this goal to be reached, and each of the elements of the LHCb experiment presented their first thoughts on how these goals might be achieved. Chris Parkes of the University of Manchester, UK scientific lead for the LHCb experiment, summarized that “Many promising ideas were presented at the workshop and these will be followed up in the forthcoming period to identify the requirements and the R&D programmes that will be needed”.

The meeting was sponsored by STFC, Institute of Physics and Institute of Particle Physics Phenomenology and the University of Manchester.