Higgs particle not the only sweet success for science

University of Manchester scientists are well represented at this year’s Royal Society Summer Exhibition with stands about ‘sweet’ science and an elusive sub-atomic particle on display this week. 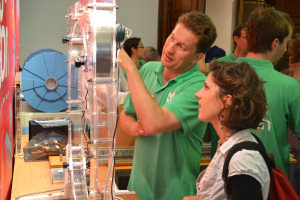 Manchester physicists will be on hand in London from today (Tuesday) to recount last year’s hunt for the Higgs boson at CERN’s Large Hadron Collider on the Franco-Swiss border and the Fermilab Tevatron in Chicago.

Manchester researchers are heavily involved in the experiments that led to the discovery of the particle scientists believe explains the standard model of physics and why objects have mass.

Meanwhile, Manchester chemists will display their latest research about sugars and how a relatively new discipline, ‘glycomics’ – the study of sugars – could provide answers to a range of previously unsolved problems, ranging from disease to clean energy.

“The search for the Higgs boson in science is on an epic scale – it is a quest that has spanned half a century and created the most ambitious experiments science has ever seen,” said Professor Stefan Soldner-Rembold, from Manchester’s School of Physics and Astronomy.

“The CERN experiments have discovered a new particle that, from initial tests, has mass and other properties consistent with the elusive Higgs boson. Our exhibition at the Royal Society next week will attempt to explain to the public just how important these findings are and where we go from here.”

Professor Sabine Flitsch, another Manchester exhibitor at the Royal Society, said: “The aim of our exhibition is to explain to the public just how important and exciting research into sugars is – it really could unlock answers to many scientific questions that have remained a puzzle until now.”

The Manchester scientists will be presenting their research at the Royal Society in London from Tuesday, 2 July, until Sunday, 7 July (details below).