Bernice Hyman, who is a Bibliographical Assistant in the Joule Library, is the proud owner of an iPad, thanks to the Staff Survey 2013. 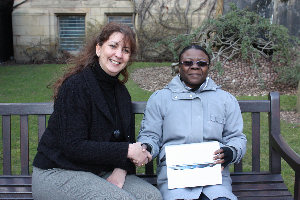 Bernice was chosen at random from all of the people who have completed and submitted the survey since it opened on 11 March.

Capita, which is running the survey on the University’s behalf, is choosing a winner each week the survey is live, from everyone who has completed the questionnaire.

So the sooner you submit your survey, the more chances you have of winning one of the four remaining iPads.

And Bernice isn’t the only one to benefit from the Staff Survey 2013.

The University is donating £1 for each completed survey submitted to the three charities chosen by staff. So far The Christie has received 32% of donations, Cancer Research UK 41% and Water Aid 27%.

You should have received an email from Capita on Monday 11 March with a link to the survey – it will appear in your email inbox as:

If you don’t have email access at work, then your line manager will make sure you receive a paper copy of the survey to complete and return to Capita.

To find out more about the Staff Survey 2013, visit: