Eleven University security officers have been honoured for their bravery after they helped apprehend a gunman who robbed a student. 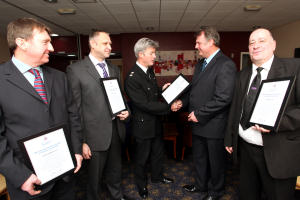 They played various roles in the incident on campus last June. Paul Greenlees who is Deputy Security Manager, said: “You don’t really think about what might happen when you are in the middle of an incident. We come from all walks of life and have a lot of experience under our belts so we work well as a team.”

Chief Superintendent John O'Hare said: “All 11 are worthy recipients of their Branch Commander’s Certificate. The fact the offender was armed makes their actions all the more heroic and they are a credit to their colleagues, family and friends.”