Emerita Professor Katharine Perera has received the University’s most prestigious medal, its Medal of Honour. 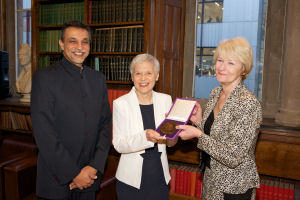 Katharine, who was once described as representing everything which is intended by the phrase ‘academic leadership’, is a former Senior Pro Vice-Chancellor of the Victoria University of Manchester.

Even when she officially retired from the University, she continued to make an impact, directing the Women in Leadership project and identifying ways to increase the proportion of women in leadership positions at the University.

She also played a huge part in establishing the Athena Swan awards at the University, which focus on the career advancement of female academics in science, engineering and technology.

The Medal of Honour is bestowed on people who have made an exceptional contribution to the work of the University, the city or the region.

President and Vice-Chancellor Professor Dame Nancy Rothwell said: "It was a great pleasure and a privilege to recognise Katharine’s enormous contributions to the University by the award of the Medal of Honour. She has been a true role model for many staff-men as well as women."