A 100% electric vehicle used at the London 2012 Olympics is the most recent addition to the University’s motor fleet. 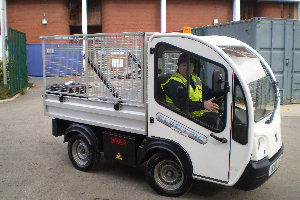 The Goupil G3 utility vehicle, which was delivered to the Environmental Services Unit depot on 11 March, is not only incredibly sustainable, but is also recycled. It was previously used to keep the Olympic Park clean and shipshape during the London 2012 Olympic and Paralympic Games.

The purchase of the Goupil G3 was the result of a joint initiative by two colleagues in the Directorate of Estates and Facilities. Sustainable Travel Planner Andrew Hough had organised a demonstration of a G3 on campus and, when Goupil later offered the Olympic vehicle for sale, Operations Manager Phil Lord was quick to secure the secondhand bargain for only £9.2K (a new G3 costs £18K).

Andrew said: “Part of my role is to find ways of reducing the carbon emissions from fleet vehicles, through the University’s Sustainable Travel Plan. It was great that Phil saw the potential here and the price reduction made for a positive business case, alongside all the other practical factors.

“The G3 runs so smoothly and quietly that the driver sometimes needs to chime its distinctive bell to warn people that it is approaching! Its presence on campus will set a great example for our sustainability goals.”

During its new life at the University, the G3 will be used to empty recycling units and litter bins on the main campus.

With running costs of around 2p a mile, the G3 is around 80% cheaper to run than its diesel predecessor, which cost 12p a mile, and should yield annual fuel savings of over £500 (based on annual mileage of 5,295).

It can be re-charged easily overnight from a standard three-pin socket. There will be no vehicle tax to pay because the G3’s CO2 emissions are below 100g/km.

Andrew added “In terms of carbon, there are no ‘tailpipe’ emissions at all. The amount of carbon produced to create the electricity depends on the source and, although there are complexities around this, I am confident the overall carbon emissions will be substantially less.”

Paul Shaw, Deputy Manager of the Environmental Services Unit, said: “The ESU is keen to find ways of keeping the campus clean and green. We hope that the G3 is the first of a growing number of lower carbon University fleet vehicles.”