Red Nose Day may well be on 15 March but, in the best Eddy and Patsy tradition, the School of Chemistry has decided to buck the trend and stand out from the crowd by hosting a lunchtime screening of Absolutely Fabulous: The Last Shout on Tuesday, 26 March at 12pm. 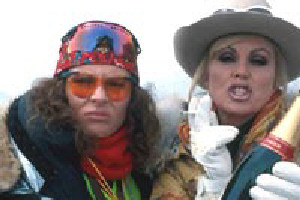 For a £1 entrance donation for Comic Relief you can join the legendary duo on the slopes of the French Alps where they have retreated to escape their ever increasing woes. Saffy is getting married, against all probabilities dippy Bubble has got a job at French Vogue and in the worst tragedy of all, Patsy has been kicked out of her flat above Oddbins!

With cat fights, near death experiences and a trip to meet God, even the ever present and plentiful supply of Bolly isn’t going to stop this holiday from being an unmitigated disaster. And things go from bad to worse on their return home. As the wedding planner from hell, Eddy hijacks Saffy’s Big Day from the gown to the bridesmaids and you really don’t want to know what happens when the vicar gets to that part in the service where he asks if anyone has any objections ...

Join the in-crowd at the School of Chemistry, Room G54, on 26 March at 12pm to find out whether Saffy ever gets to go on her ultra expensive honeymoon, if Eddy recovers from worshipping at the feet of Christian Lacroix and where exactly Patsy is going to lay her beehive now that she’s lost her off-licence. It’s going to be 90 minutes of Absolute Fabulousness, darling!