The University of Manchester has received confirmation of £23m of funding from the European Regional Development Fund towards the £61m National Graphene Institute. 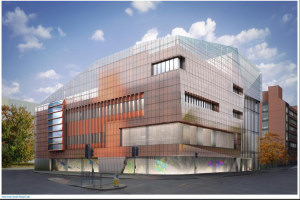 This is the largest sum of funding awarded this year by the North West European programme, managed by the Department for Communities and Local Government, and allows the University to build the world’s leading centre of graphene research. This announcement is the confirmation of funds previously applied for by the University.

The National Graphene Institute will be the UK’s home of research into the world’s thinnest, strongest and most conductive material, providing the opportunity for researchers and industry to work together on a huge variety of potential applications.

It is hoped the centre will initially create around 100 jobs, with the long-term expectation of many thousands more in the North West and more widely in the UK.

The 7,600 square metre building will house state-of-the-art facilities, including two ‘cleanrooms’ – one which will take up the whole of the lower ground floor – where scientists can carry out experiments and research without contamination.

The Institute will also feature a 1,500 square metre research lab for University of Manchester graphene scientists to collaborate with their colleagues from industry and other UK universities.

As well as the European funding, the Government has provided £38m via the Engineering and Physical Sciences Research Council as part of £50m allocated for graphene research. The National Graphene Institute will operate as a ‘hub and spoke’ model, working with other UK institutions involved in graphene research.

Some of the world’s leading companies are also expected to sign up to work at the Institute, where they will be offered the chance to work on cutting edge projects, across various sectors, with Nobel Laureates and other leading members of the graphene team.

Graphene, isolated for the first time at The University of Manchester by Professor Andre Geim and Professor Kostya Novoselov in 2004, has the potential to revolutionise a huge number of diverse applications; from smartphones and ultrafast broadband to drug delivery and computer chips.

Professor Novoselov said: “We are delighted to have been awarded this hugely-significant sum of money by the European Regional Development Fund, which will pave the way for the National Graphene Institute.

“Graphene has the potential to revolutionise so many different areas of our lives, and it is fantastic that the Government and the European Commission have recognised that with their important investments.”

Professor Colin Bailey, Vice-President and Dean of the Faculty of Engineering and Physical Sciences at The University of Manchester, added: “Establishing the National Graphene Institute is crucial to the continued advancement of graphene research in Manchester and in the UK.

“To have such a significant award allows us to build this world-leading Institute and allows Manchester to continue its well-deserved reputation as the home of graphene.”

The European Commissioner for Regional Policy Johannes Hahn said: "I am very pleased that European investments will enable the establishment of the National Graphene Institute.

“As a former Science Minister I am well aware of the importance of supporting cutting edge research and providing the means for that to be commercialized. This is good news for the North West of England in terms of jobs but it also will ensure that Europe as a whole remains at the forefront of research into graphene: giving EU businesses a valuable opportunity to use the vast potential of this material.

“Supporting these kinds of initiatives is just what our modern European Regional Policy should and will be doing more of in the future."