University of Manchester researchers were celebrating a triple success last night after taking three of the eight top honours at the 11th annual Bionow awards for biomedical organisations in the north. 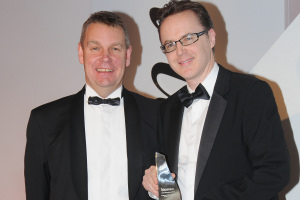 Dr Dobson, who is based in the Faculty of Life Sciences, has developed a mini sensor that can detect when disposable medical products, such as wound dressings, intravenous lines, catheters and contact lenses, become colonised by microbes.

Traditionally, scientists have tried to find better ways to kill the invading microbes, which can lead to severe illness or even death in patients, but the approach has not fully worked, and may never eradicate the problem.

Dr Dobson’s team, which comprises material scientists and engineers, clinical researchers and biologists, has developed technology that allows a miniature biochemical sensor to be embedded close to a device’s surface. The sensor dramatically changes colour when the surface becomes infected, quickly alerting healthcare professionals or the wearer when too many bugs are present.

Phagenesis Ltd is a University spinout company based on the Manchester Science Park. Established in 2007, Phagenesis has developed a clinically proven, medical device technology for the treatment of dysphagia – where a patient has difficulty swallowing – following stroke.

The development of the device – called Phagenyx – is the result of nearly 20 years’ research into dysphagia by Professor Hamdy and his team. They used brain-imaging techniques to discover which parts of the brain are responsible for the swallow reflex and discovered that one half of the brain played a greater role but that this was random and depended on the individual.

Stroke – caused when a blockage reduces the flow of oxygen to the brain or by a bleed – also tends to affect one side of the brain and if this coincides with the side responsible for swallowing, it can result in dysphagia. Phagenyx has been proven to help reprogram the brain to use the side unaffected by the stroke.

Professor Hamdy, who is based in the University’s Faculty of Medical and Human Sciences, said: “I am very proud to be part of the team at Phagenesis and receive this award from Bionow. It is the culmination of two decades of clinical research and recognition of the huge effort and commitment put in to Phagenesis to deliver what is a revolutionary treatment for dysphagia in stroke.

“I’d like to thank all those people in Phagenesis who have worked so hard to finally realise the potential of this novel technology, facilitated by academic support from The University of Manchester. I believe this award will help to take Phagenesis to greater heights in the MedTech industry.”

Dr Dobson, whose project was funded by the University’s intellectual property company UMI3 to the tune of £126,000 and has attracted further funding of £225,000 from the Biotechnology and Biological Sciences Research Council (BBSRC), said: “It was fantastic to receive such a prestigious award so early in the development of this technology. Our goal is to aggressively target medical device infection using this new approach. The boost the Bionow award provides should significantly shorten the time it takes us to achieve this, allowing us to protect patients from infection sooner.”

Euprotec, a specialist in the infectious disease therapeutic area, was initially housed in the Manchester Incubator Building but expanded into the Manchester Science Park in 2011. The company provides bespoke anti-infective drug discovery and development capabilities to a vast and growing number of global clients. Euprotec collaborates with clients to discover and develop therapies and vaccines to treat and prevent serious and life-threatening infections resulting from multi-drug resistant bacteria and fungi, including MRSA, Pseudomonas, and Clostridium difficile.

Dr Warn, who is part of the Institute of Inflammation and Repair, said: “We are delighted to be named 'biomedical service provider of the year'. It is a great testament to our dedicated team and the high-quality science and service that they continually provide. Euprotec takes great pride in its work and is devoted to delivering scientific excellence and the very best in customer service to all of its clients.

“The award from Bionow further validates our expertise and ability to deliver and, as we increase our international client base, we look forward to expanding our facility and team of experienced scientists in order to build upon our existing capability in such an important therapeutic area.”

Bionow is a business development company that supports the biotechnology sector, both private and public, in the north of England. A total of eight awards were presented at the event on Thursday evening. Bionow chairman Dr John Stageman and chief executive Geoff Davison hosted the evening.

Mr Davison said: “The strength and depth of the cluster and diversity of applications made this year’s judging as difficult as ever and the winners represent the cream of one of the leading clusters of biomedical businesses in the UK.”