Jodrell Bank is the star attraction of Cheshire tourism

Jodrell Bank Discovery Centre has won Tourism Attraction of the Year 2012 in the Marketing Cheshire Awards. 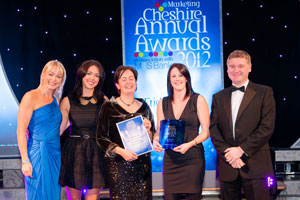 The Discovery Centre won the prestigious award in the face of challenging competition from rival tourist attractions including Chester Zoo.

The award gives public recognition of the University’s commitment to welcoming people from the local community into its publicly accessible spaces - a key element of Goal Three.

Following hot on the heels of the award of Large Visitor Attraction of the Year to John Rylands Library, Deansgate, at the recent Marketing Manchester Awards, it contributes to a great joint achievement by the University's visitor attractions.

The Chief Executive of Visit England has congratulated the Discovery Centre team personally on the win - as has local MP, David Rutley, and many of the other tourism attractions in the North West.

Dr Teresa Anderson, Director of the Discovery Centre, said: “The judges (including some very distinguished 'mystery shoppers' who visited us in the last few months) cited the commitment of our staff to excellence as one of the main reasons for the award, so congratulations must go to the whole Discovery Centre team for their efforts.”