His Excellency, the President of Ireland, Michael D Higgins, visited The University of Manchester yesterday, as part of an official three-day visit to the North West of England. 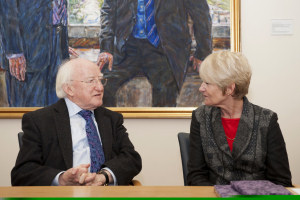 President Higgins, who studied at Manchester in the late ‘60's, was invited by President and Vice-Chancellor Professor Dame Nancy Rothwell to give a lecture entitled 'Manchester and its Irish Connections' to an audience of staff and students in the Whitworth Hall.

He was accompanied by Sabina Higgins, as well as the Irish Ambassador, H.E. Mr Bobby McDonagh and Mrs Mary McDonagh.

During his lecture he said: “It is special pleasure to be back at The University of Manchester, which has a long and venerable history of academic heritage across a wide variety of fields. I also want to express my gratitude for the welcome you have extended to so many Irish students over the years.”

President Higgins also discussed the links between Manchester and Ireland caused by emigration into the North West and said: “Although Liverpool was the gateway for so many Irish people – 1.3 million in three years during the Famine – Manchester tended to be, for many, the end of a journey, a home.”

He added: “Let us all welcome the changes that have taken place and the new circumstances in which we can celebrate a parity of respect and esteem, the ability to listen to each other’s narratives. The closeness and warmth that we laud today was founded to a large extent upon the lives and sacrifices of generations of Irish emigrants who settled in this country.”

President Higgins first arrived in Manchester in 1968 and spent much of his time attending lectures and seminars in the Dover Street Building.

After leaving the University last night, he went on to meet senior figures in Manchester Town Hall and attended an Irish Community Reception hosted by Ambassador McDonagh.