Across the Atlantic for cancer research

Manchester graduate's marathon fundraiser in tribute to his brave wife 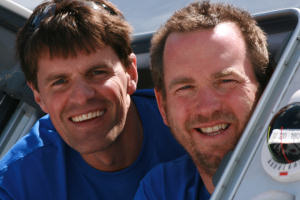 A Manchester graduate is taking on the challenge of a lifetime – by rowing across the Atlantic with his best friend to raise funds for breast cancer research.

Geography graduate Nick Rees and Ed Curtis will row from the Canary Islands to Antigua, a journey of almost 3,000 miles, in the Talisker Whisky Atlantic Challenge during December 2013. Considered to be the world’s toughest rowing race, the duo will aim to row unsupported.

Their inspiration is Nick’s wife Ellen, also a Manchester graduate, who was diagnosed with breast cancer in 2009 aged just 33. Nick says: “Ellen has showed incredible strength to get through it. She is our inspiration for wanting to take on such a big challenge for Breakthrough Breast Cancer. Knowing the money raised will help fund new treatments and help save lives is our motivation for this unbelievably tough race.”

More people have been into space than rowed the Atlantic, and it’s not for the faint-hearted, with unpredictable, extreme weather conditions and 40 foot waves. Physically, rowers have to deal with blisters, salt rashes, sleep deprivation and rowing in 2-hour shifts around the clock for weeks. They will typically burn 8,000 calories a day and lose 20 per cent of their body weight during the race.

They have bought the winning boat from last year’s race and have received handy tips from others who have completed the epic challenge. With just under a year to go, Nick and Ed are now juggling rigorous training with their work commitments.

The pair are hoping to raise £250,000 for Breakthrough Breast Cancer.