A series of events will mark the 50th anniversary of the Ferranti Atlas supercomputer developed in Manchester from 1956 to 1962. 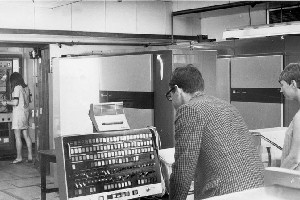 A symposium and social events will be held in December to celebrate the work of Professor Tom Kilburn and others, along with local company Ferranti Ltd from 1959.

The first production Atlas was inaugurated at the University on 7 December 1962 by Sir John Cockcroft, the Nobel prize-winning physicist who was Director of the UK’s Atomic Energy Authority.

At the time of its inauguration, Atlas was reckoned to be the world’s most powerful computer. A total of six Atlas 1 and Atlas 2 computers were delivered between 1962 and 1966.

The Atlas anniversary event will bring together, probably for the last time, a unique group of industrialists, academics and end-users who contributed to a world-class project which made a beneficial impact upon the UK’s scientific computing resources in the 1960s.

The following events are open to anyone with an interest in the history of technology:

Numbers are limited. If you wish to attend any of these sessions, please register at:

1.30 – 7pm: The main Atlas Anniversary event, consisting of an Exhibition, a Symposium of invited talks and discussion, and a drinks reception.

There will be no charge for attending the main event, but you are asked to register before 1 December at:

More information about the Anniversary events and the Atlas computer