Cancer survivors dig for a future with ‘More Tomorrows’ 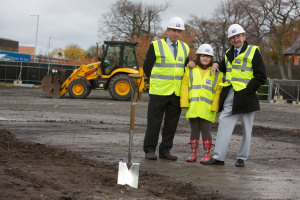 The new facility, which will be one of the largest carrying out research into the disease in Europe, is being funded by Cancer Research UK, The Christie and The University of Manchester. A fundraising campaign, called ‘More Tomorrows’, has been launched to deliver the remaining funding commitment of £16m needed for the new building, which is due for completion in spring 2014, and is being constructed opposite the main site of The Christie and Paterson Institute in Withington.

Stan Parker, aged 73, from Salford, together with nine-year-old Amber Irvine, from Ashton-Under-Lyne, dug the first piece of ground for the foundations of the centre which is set to revolutionise cancer treatment. They were joined at the ‘breaking the ground’ event this morning by the Director of the Manchester Cancer Research Centre, Professor Nic Jones, and other representatives from the three partner organisations.

All three MCRC organisations have worked closely together under the umbrella of ‘Manchester Cancer Research Centre’ since 2006, but the new building will provide an opportunity for scientists and clinicians to work collaboratively under the same roof.

Amber Irvine, who has three sisters, was diagnosed with acute lymphoblastic leukaemia in 2009. Her mum Samantha, aged 26, had become concerned after Amber started school and was continually exhausted. Amber was even so tired on one occasion she fell asleep in the pool at a swimming lesson.

It was initially thought Amber had a virus, but when she was eventually diagnosed with leukaemia doctors warned Samantha that her daughter’s blood count had been so low that had she not been admitted to hospital, she would have died within the next 24 hours.

Amber started an immediate course of chemotherapy treatment while her family was living in Lincolnshire, but they moved to the North West to be close to Samantha’s mother shortly afterwards. Amber completed her two and a half years of treatment at the Royal Manchester Children’s Hospital.

Despite Amber being repeatedly admitted to hospital with infections, and having to face losing her hair twice, she has made a good recovery and has now been in the clear from cancer for 12 months. The Broad Oak Primary School pupil still needs check-ups every six weeks.

Mum Samantha said: “A cancer diagnosis is a huge shock for anyone, but is devastating for a child and their family.

“We have faced some very tough times over the past few years, but Amber has remained brave throughout the many hospital appointments.

“Amber is so thrilled to be breaking the ground for the new cancer research building, as it’s such an honour.

“It is fantastic to know Amber is playing a small part in helping to create a building which is going to save future generations affected by cancer – a disease which has had such an impact on our lives.”

Stan Parker was diagnosed with oesophageal cancer in 2004. He underwent an “oesophagectomy” which involved most of his oesophagus being removed.

The following year, when Stan was still recovering from the surgery, the cancer spread to his liver.

Stan, who is aged 73, underwent intensive chemotherapy treatment at The Christie.

When it was suggested Stan should consider joining a clinical trial, his wife Judy urged him to sign-up immediately.

Sadly, Judy, died suddenly from a heart attack when Stan was receiving the first part of treatment on the clinical trial.

The trial has involved testing a drug called “tremelimumab” for cancers of the food pipe and stomach.

Tremelimumab is a type of monoclonal antibody drug which works by triggering the body’s immune system to attack cancer cells.

Doctors have been testing whether it would be useful for cancer that had started to grow again.

Stan joined the clinical trial in 2006 and is still on the same trial now six years later.

He said: “I sometimes feel like I am tempting fate by telling people about what has happened to me!

“But I certainly didn’t expect to still be alive six years later and feeling so well.

“It is such a shame Judy my wife didn’t get to see the impact of the clinical trial on my life as she was so pivotal in encouraging me to sign up for it in the first place.

“I have received the most fantastic cancer treatment here in Manchester. It makes me incredibly proud to know that Manchester Cancer Research Centre researchers will be on my doorstep and is going to make such a difference for people like me diagnosed with the disease in the future.

“Without the vitally important research into cancer which has happened in this city, I would not be alive today.”

Director of the Manchester Cancer Research Centre, Professor Nic Jones, said: “We are very much in a ‘golden age’ of cancer research, having come a long way in the last 40 years with survival rates driven up by improvements in treatments and early diagnosis.

“However, we still have a long way to go in the fight against the disease. To take our life-saving research to the next level, we need more laboratories and more world-class scientists.

“The new research building will provide an amazing role in hosting world-class cancer biology, drug discovery and clinical trials all on the one spot.

“Providing more lab space, the new building will attract scientists from all over the world enabling us to make more life saving discoveries faster.

“Manchester already has an impressive legacy in cancer research, but the new centre will put the city on the world map for helping to save lives.

“By supporting the fundraising campaign, people in the North West will be giving hope to future generations ensuring more families have ‘More Tomorrows’ with their loved ones.”

In Greater Manchester alone, around 13,200 people are diagnosed with cancer every year – that’s 36 people affected every day.