The University of Manchester’s iconic John Rylands Library has been made Manchester’s ‘Large Visitor Attraction of the Year’ at the city’s annual tourism awards. 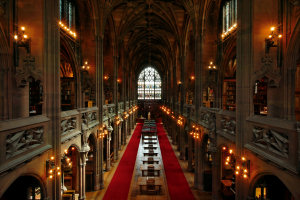 The building, described by the judges as progressive and exciting, is a major visitor attraction, one of the city’s most famous landmarks as well as a world-renowned research library.

The Library was built in the 1890s by Mrs Enriqueta Rylands in memory of her husband John, Manchester’s most successful cotton tycoon.

By the late 1990s, the Grade I listed building had deteriorated structurally, prompting conservation work and improvements to physical access and facilities for visitors. The magnificent neo-gothic building on Deansgate reopened in 2007 after a £17m transformation.

The judges felt that the Library offered something that could not be replicated elsewhere, targeting a younger demographic than would traditionally be expected for such an attraction.

Jan Wilkinson, Director of The John Rylands Library, said: “Since we reopened in 2007, we have become one of the city’s most important visitor attractions, as well as cementing our place as one of the world’s most important academic libraries and home to a number of world-renowned collections.”

"We've worked tremendously hard to create a venue and programme of events and exhibitions which will appeal to all visitors to Manchester as well as those living, working and studying in the city.

"We are thrilled that The John Rylands Library has been recognised in this celebration of tourism excellence, particularly as it is the first time we have submitted an entry and the competition was very fierce."

The awards ceremony at The Lowry, Salford Quays was attended by over 300 representatives of the industry and included a sneak preview of Disney’s The Lion King, which opens at The Palace Theatre on 1 December.

Andrew Stokes, Chief Executive of Marketing Manchester, said: “The awards celebrate tourism excellence across Greater Manchester – recognising the year-round contribution that organisations, venues and individuals make to the city’s tourism product. Many of our winners will now have the chance to progress through to the Enjoy England Awards for Excellence to represent Greater Manchester at national level and we wish them the very best of luck.”