A study led by The University of Manchester has demonstrated that new technology that can analyse millions of gene sequences in a matter of seconds is an effective way to quickly and accurately identify diseases in skeletons. 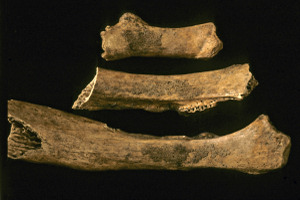 Professor Terry Brown, working in partnership with Professor Charlotte Roberts from Durham University, used a next generation sequencing approach, including hybridization capture technology, to identify tuberculosis genes in a 19th century female skeleton found in a crypt in Leeds.

Their study is part of wider research into the identification of strains of TB in skeletons dating from 100 AD to the late 19th century. It's hoped that understanding how the disease has evolved over time will help improve treatments and vaccines. TB rates have been increasing around the world, and it's estimated that one third of the world’s population has latent TB. After HIV it kills more people than any other infectious disease.

Certain strains of TB affect the sufferer's bones, especially in the spine. The marks made by the disease remain evident on the bones long after the person's death. It’s this evidence that Professor Roberts used to find suitable skeletons to screen for tuberculosis genes.

She sourced 500 skeletons from across Europe that showed evidence of TB dating from the Roman period to the 19th century. Bone samples from these skeletons were screened for TB DNA, and of those 100 were chosen for this particular study.

Professor Roberts explains: "So many skeletons were needed as it's very hard to tell if any DNA will have survived in the bones. You don't really know if there will be any present until you start screening and in the past that has been a lengthy process."

Professor Terry Brown then took on the search for TB DNA in the skeletons. Each small section of bone was ground up and placed in a solution. That was then put in a special machine which captured every gene sequence in the DNA. Millions of sequences were captured and sent to a computer.

Professor Brown and his team then searched for the gene sequences for tuberculosis. Because it is a bacterial disease the bacteria's DNA can remain in the bones after death.

Talking about the process Professor Brown said: "Previously we could only scan the bone sample for specific genes. We wouldn’t see everything that was there which meant we could easily miss other genetic information that could be relevant. Using the hybridization screening meant we could search for different strains of TB, not just one."

About 280 bits of sequence in the DNA were found to match known tuberculosis genes. The data placed the historic strain of TB in a group that is uncommon today, but was known to have been present in North America in the 19th century. In fact it was found to be very similar to a strain recorded in a tuberculosis patient in New York in 1905.

Discussing the results Professor Brown says: “The fact that this particular strain of TB was found in both North America and in the skeleton from 19th century Yorkshire is not necessarily unusual. There were many migrants from Britain to America during the 19th century so it makes sense that TB strains were spread.”

One of the downsides of hybridization capture identified by the researchers in this study was that it is possible to mistakenly identify DNA. Because it looks at all the sequences across the sample it may identify DNA that isn’t from the bone, but actually from the surrounding soil or environment where the skeleton was buried.

In this study the results were checked using the more traditional method of polymerase chain reactions and were found to be accurate. The researchers concluded that using hybridization capture and next generation gene sequencing is an accurate and effective way to obtain detailed genotypes of ancient varieties of tuberculosis. It could potentially be used to study other diseases. Their findings have been published in the journal The Proceedings of the National Academy of Sciences.

Professor Roberts says: “We’re really pleased with the results of this study and that the technology works. It will save a lot of time in the future. We now hope to publish more of the huge amounts of data we have acquired from the sequencing”

The scientists hope to compare their results with similar studies being done in America to assess what tuberculosis strains have been identified there. They’re interested in studying which strains were brought to the country by migrants and what impact those had on the native strains of the disease.