Professor of Creative Writing Jeanette Winterson is on Monday (22 October) taking part in one of the events celebrating the launch of The University of Manchester’s School of Arts, Languages and Cultures. 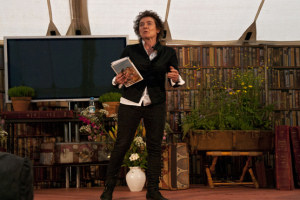 Her sell out first public engagement at The University of Manchester will follow a special reception in which Sir Adam Roberts, President of the British Academy, formally launches the School with a keynote address.

One of the country’s best known literary figures, Jeanette Winterson will discuss gender and the imagination with acclaimed American author A.M. Homes at the sell out event.

Originally from Manchester, she is the author of novels including the international bestseller Oranges are Not the Only Fruit and Why Be Happy When You Could Be Normal? She was made an OBE in the 2006 New Year Honours list. Her  latest novel is The Daylight Gate.

May We Be Forgiven is A.M. Homes’ sixth novel, and follows This Book Will Save Your Life and the highly acclaimed memoir, The Mistress’s Daughter. A contributing editor to Vanity Fair, she wrote and produced for the television series The L Word and is currently developing a major US TV series for HBO called The Hamptons.

The Winterson event, organised by The University’s Centre for New Writing, is also part of its Literature Live series, bringing the best known contemporary writers to Manchester to discuss and read from their work.

Among the speakers at the launch reception are Professor Dame Nancy Rothwell, President  and Vice Chancellor of The University of Manchester and Professor Jeremy Gregory, Head of the School of Arts, Languages and Cultures.

Also speaking will be Sir Adam Roberts and Professor Keith Brown, Vice-President and Dean of the Faculty of Humanities.

Professor Gregory said: “The creation of the School of Arts, Languages and Cultures is a tremendously exciting development for the place of the arts within The University of Manchester.

“I look forward to working with my colleagues in building on our already excellent reputation for teaching and research to make this one of the leading centres for the study of arts, languages and cultures in the world.”