Opening a new museum exhibition is a rare honour for a human, but Ruby the schnauzer took it all in her stride when she jumped over a pink ribbon to open Breed: The British & their Dogs at The Manchester Museum on Wednesday 3 October. 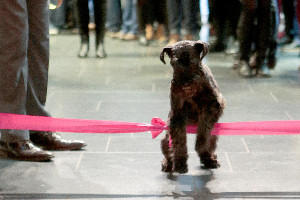 Around 300 people came to the launch of Breed, which is open until 14 April 2013, along with representatives of each of the six breeds featured in the exhibition (organised by the Kennel Club). These live dogs will also be coming along to the Museum’s Dogs on Show Big Saturday on Saturday 13 October. Treats for humans were served in dog bowls and drinks included beer from Black Dog Brewery.

Five year old Ruby was accompanied to the launch by her owner, Nick Merriman, Director of the Museum, who said: “Breed is a great example of the way the Museum is bringing the University's academic work to a popular audience. The opening night exemplified this, with a speech from Professor Mick Worboys who led the research, and Ruby’s opening of the exhibition!”

The history of the British Isles and its inhabitants, both human and canine, has long been entwined. Breed reveals the enduring and affectionate relationship between the British people and their dogs and explores the very beginnings of pedigree dog breeding in Britain.

The exhibition focuses on six pedigree dogs: bloodhound, borzoi, bulldog, collie, Irish wolfhound and Pekingese. Each breed highlights something unique about British history and culture and the connection between human and dog, from the bloodhound’s role tracking down Jack the Ripper to the patriotic spirit the bulldog embodied during WWII.

This exhibition has been developed with The University of Manchester’s Centre for the History of Science, Technology and Medicine and supported by the AHRC.