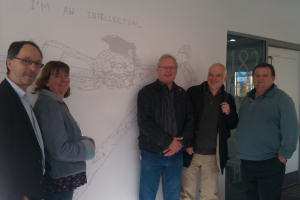 The Faculty of Life Sciences Vice-President and Dean Professor Martin Humphries and several of his colleagues couldn’t contain their admiration when the building’s Development Manager Rosie Jones showed them around.

Professor Dean Jackson said: “I absolutely love it. I am astonished at the thought and attention to detail that has gone into this place. It’s mindblowing.

Martin’s Personal Assistant Annmarie Entwistle agreed: “It’s amazing. Everything works so well. Even the wraparound study chairs and meeting pods – so simple yet effective. The colours and decor are beautiful and so inspiring too.”

The group made the most of the tour – talking to students, including a first year registering on her course online and taking in her new surroundings and a Humanities student doing her background reading on a very comfortable two-seater.

In fact the seating proved a great talking point, from the “awesome” computer chairs to those featuring Nobel-prizewinners’ details, which Rosie assured the group will be delivered soon.

As we walked past the quotes from Manchester’s great and good, carved into the wall, Professor Ray Boot-Handford automatically reached out: “The texture invites you to touch it. It’s great.”

The artwork throughout was also well received, though Zoologist Professor Matthew Cobb laughed that the spider crab under the words ‘I am an intellectual’ “doesn’t have eyes like that – have a look in the Museum window!”

Learning Commons staff have had just as strong a reaction, opening the doors on their £24 million, four-year project.

Nicola Crosby, the Learning Commons Service Coordinator, admitted it was a little “scary”. She said: “It was disconcerting at first, even though it was what we had all been waiting for.

“However, it was very interesting to see how the students were using the space and also very surprising that they used it as a serious place of work from the very beginning. The demand for the space was undeniable and they seemed immediately at home and did not want to leave when we closed for the day.

“I feel happy and relieved to see the building open. The conceptual design of the space has been realised well in practice; the theory behind the design has met the needs of the students realistically and even exceeded them to some extent, we have had such a lot of positive comments.”

Rosie agreed as she wrapped up the tour: “That’s what the fuss is about, what we have worked on for so long. In a way we are still working on it, asking students for feedback, which has been extremely positive.

“And I would love staff to come here, nothing is stopping you – come and use it.”