A lecture to honour the 100th birthday of one of Manchester’s most well-known mathematicians and politicians will be held later this month. 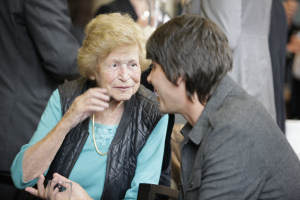 The 2012 Dame Kathleen Ollerenshaw Lecture will celebrate her significant contribution to education and politics.

The lecture, entitled ‘The oddity of parity’, will be delivered by Professor Sir Martin Taylor, FRS, of Merton College, Oxford. It will cover the pervasive role of parity throughout mathematics – ranging from magic squares to some of the most important and topical questions in number theory.

It will be held in Lecture Theatre A in University Place, The University of Manchester, at 5pm on Thursday 18th October. It is free, but guests must register, which can be done at www.mims.manchester.ac.uk/events/ollerenshaw-lectures/

Born in Manchester, Dame Kathleen took her BA and DPhil– both in mathematics – in Oxford and has since combined mathematics research with politics, in which sphere she has been Lord Mayor of Manchester and an advisor on education to Margaret Thatcher's Government.

She is probably best known in mathematics for her work on magic squares, but also has a formidable reputation as an astronomer and the observatory at the University of Lancaster bears her name.

She is passionately committed to encouraging interest in mathematics amongst young people. She has been deaf since the age of eight, and is an inspiring role model to many.