There’s a fresh new look and exciting new menus in the lounge and restaurant on the first floor of the Christie Building. 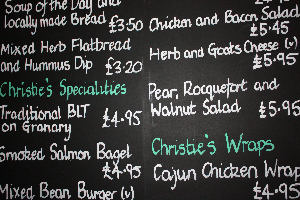 Christie’s Bistro has re-opened after a summer of extensive refurbishment to its restaurant and main counter areas. There's a brand new look with new furniture and carpeting in the restaurant and a re-finished wooden floor and new coffee tables in the lounge, but this former library retains its distinctive character.

Exciting new menus accompany the new look: more salads and sandwiches, with artisan-type bread, have been added to the lounge menu, while the restaurant now offers many more choices.

The surroundings and the food were clearly appreciated by fresher Ellen Dring and her parents, who were enjoying lunch in the lounge on Thursday 13 September. They had already dropped in twice for coffee and had come back a third time to sample the food. Ellen, who will be studying Ancient History, described both food and venue as “Lovely!” and dad Ian agreed.

Come and check out the new look and menus for yourself and reach your own verdict: Christie's Bistro is open Monday to Friday from 9am until 5pm (excluding Bank Holidays).

The new menus will be online from 17 September at:

Alternatively, ask the team for copies by contacting them at:

You can see the new look at:

Watch out for the Christie's Bistro team on Oxford Road during Welcome Week – they’ll be handing out flyers for cheap coffees!