Celebrating the Queen’s Anniversary Prize at the House of Commons

Industry leaders, Government officials and academics from The University of Manchester came together last week in London to celebrate the award of the Queen’s Anniversary Prize for the Dalton Nuclear Institute. 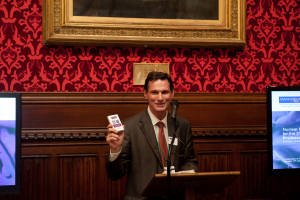 The prize, which was awarded by Her Majesty the Queen at a reception at Buckingham Palace in February in the Diamond Jubilee round, recognises and celebrates the innovative work of outstanding quality within UK Higher and Further Education Institutions which is having a transformative impact on industry and providing numerous benefits to society.

The celebratory event, held at the House of Commons and hosted by The Rt Hon the Lord Jenkin of Roding, was to recognise the University’s success in nuclear research and training and to hear from Charles Hendry MP, Minister of State for the Department of Energy and Climate Change, regarding opportunities for growth in the nuclear sector.

It also gave those attending the opportunity to learn more about the Dalton Nuclear Institute and its ground-breaking research and facilities, and to discuss future nuclear research and development needs for the UK.
The event was opened by The Rt Hon the Lord Jenkin of Roding, who highlighted the recent House of Lords Report on nuclear R&D which had led to a renewed focus on the UK nuclear research capability as a means to deliver the technology and skills needed for low carbon nuclear power to contribute significantly to the future UK energy mix.

This was followed by a welcoming speech from Professor Colin Bailey, Vice President and Dean of the Faculty of Engineering and Physical Sciences at The University of Manchester, who spoke about how the University established the Dalton Nuclear Institute in 2005 and its rise to be a world-leading centre for nuclear research.

He acknowledged the hard work of all those involved which had resulted in the Queen’s Anniversary Prize award.

Mr Hendry described the major opportunities for nuclear research and development to contribute significantly to growth in the UK and highlighted the positive on business opportunities which the Electricity Market Reform bill will bring.

He also highlighted the opportunity for the UK to re-engage in international programmes, to establish a network of nuclear research facilities, and to contribute to the national and international skills agenda.

The evening was rounded off with the opportunity to network and see the displays on view which provided information on the work carried out across Dalton Nuclear Institute, and the facilities, education courses and outreach activity it is involved with.

Mr Hendry said: “The Dalton Nuclear Institute is a world-leading centre of expertise and fully deserves this recognition through the Queen’s Anniversary Prize.

“With the country on the cusp of a nuclear renaissance, research and development in the nuclear sector can be a significant driver of our future economic growth.

“Our reforms to the electricity market and policies to reduce the barriers to investment in nuclear new build will make the UK one of the leading global destinations to do business in the field.”

Professor Sherry said: “It was wonderful to celebrate the Diamond Jubilee Queen’s Anniversary Prize with those who have worked with the University in developing the nuclear R&D capability.

“We look forward to continuing to work with Government, industry and academia to shape and deliver the nuclear R&D and skills needed for our future energy needs and business growth.”