Admiral Sir John Kerr, Pro-Chancellor and Chair of the University’s Nominations Committee, received the University’s Medal of Honour at a special presentation ceremony after his last General Assembly meeting on 20 June 2012. 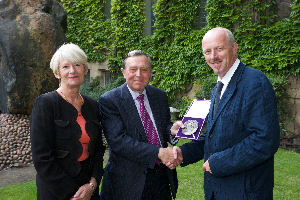 The Medal, the University’s highest non-degree award, was given in recognition of Sir John’s significant and sustained contribution to the University over many years.

Sir John was appointed as the inaugural Pro-Chancellor in 2004, on the establishment of the new University. At that stage he was well known to members of the University community, having served on the Council of the Victoria University since 1998, and on the Court of UMIST between 2000 and 2004. He will stand down from his role on 31 August 2012.

During his involvement with the Council of the Victoria University, he assisted in the Group that oversaw the merger in 2004 of UMIST and the Victoria University. He was asked to Chair the Constitutional Consultation Group, which developed the Charter, Statutes and Ordinances we now operate within. He was then appointed as Pro-Chancellor of the resulting University of Manchester.

The President and Vice-Chancellor Professor Dame Nancy Rothwell, who presented Sir John to the Chancellor Tom Bloxham, acknowledged the diligence, application and outstanding professionalism which Sir John has given to the role of Pro-Chancellor. He has been closely involved in the selection and appointment of over 25 lay members of the Board of Governors and of many more lay members of the General Assembly. Impartiality, judiciousness, and openness have been at the heart of his Chairmanship of the Nominations Committee since 2004, and at a recent informal event held for Sir John, many current and former members paid tribute to the sensitive and inclusive way in which he has chaired the Committee.

The presentation of the Medal was followed by a celebratory dinner in Sir John’s honour which was enjoyed by his family, friends and members of General Assembly.

Gillian Easson, who has been a member of the Board of Governors since 2004, will take up the role of Pro-Chancellor on 1 September.