The University is to invest more than £1,200,000 in the pilot “Investing in Success” scheme designed to boost staff development - and benefit the University. 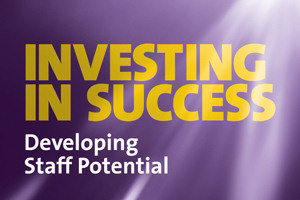 More than 150 projects will be funded over the next twelve months and the range and diversity of projects chosen demonstrates just how passionate and innovative colleagues are about their work here at the University.

From an international arts-for-health partnership to photograph and film footage of Manchester Museum artefacts to help students on a distance learning course, the applications to the Investing in Success Fund could not have been more varied, or more thoughtful.

The President and Vice-Chancellor Professor Dame Nancy Rothwell was impressed: "I could not have imagined when we launched this pilot fund how our staff would respond with such passion and enthusiasm.

"It was a really tough process, deciding which of these projects would be funded as we could see how all the applicants felt strongly, not only about their own career development but also about the work they do here at the University."

The 'Investing in Success' project was launched in November 2011. It was a £1 million fund designed to identify and support members of staff who could benefit from a modest amount of extra resource to help them engage in a particular project or activity which will accelerate their personal development and benefit the University.

The funds - up to £15,000 per project - were to be awarded to staff irrespective of their grade or length of service; the project simply had to be innovative and make them better teachers, researchers, managers, professionals and support staff.

The University received 315 applications, 150 of which were successful.

The successful projects include a plan by customer services staff to shadow various students, studying different subjects, in different years, in order to "map their journey" and better understand their needs and provide an improved student support services.

Another project will enable staff to visit a wide range of non higher education organisations such as John Lewis, Ikea and NatWest in the private sector and the Cheshire Constabulary in the public sector, to see how they work with their various 'clients'.

One senior lecturer didn't want anything new - she simply wanted to upgrade the second-hand 'swim flume' that she had inherited from retiring colleagues at the University of Birmingham. This would reduce the year-long waiting list of students wishing to use the flume - an enclosed, environmentally-controlled respiratory system where fish and amphibians can be studied swimming at different speeds - for non-invasive research on larger animals.

An academic colleague in Music plans to complete a CD of his work with a youth orchestra, with whom he began collaborating with in 2005 and had seen his work performed at the Cheltenham Festival and other major venues across the world. With most of them now professional musicians, he needed to pay their fees to record his third and final compostion with them.

A teaching fellow requested funding so he could attend the academic film festival in Delhi that was screening his documentary on the ability of language to represent emotional complex issues such as birth and death, with a view to extending the project into a new course and developing novel methods with new audio-visual techniques.

There was a request to develop the University's arts-for-health project by creating an international partnership with the National Gallery in Canberra, the New South Wales Gallery in Sydney and the medical humanities department at the University of Sydney. The project aims to train medical students from both sides to use visual arts as therapy, work with other medical schools, curate public exhibitions and give international volunteering opportunities to undergraduates.

The successful applicants have been asked to report back on their projects, so that the University can evaluate the effectiveness of Investing in Success scheme with a view to funding and promoting a similar scheme in the future.

Professor Rothwell concluded: "The reason we launched this project was that the University’s greatest asset is its staff. Our future success depends on our ability to select and retain the right people and invest in their potential and development. I look forward to seeing the feedback and hearing of all the journeys our staff have been on, with a little help from the University."