Deer causes a stir on campus

A deer has been the talk of Fallow-field after it was spotted on Friday at the heart of The University of Manchester’s busy Oxford Road campus. 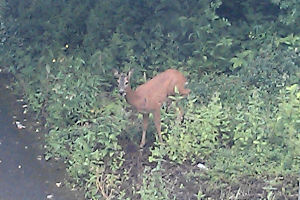 The animal was seen wandering in the bushes behind the IT building between Upper Brook Street and Oxford Road by a number of stunned staff and students.

Telecoms engineer Brian Starr who photographed the deer explained that it seemed calm and completely unfazed. He said:  “It was there all day. We saw it at about 11.40am and then again at 4.20pm.”

The sighting was reported to Security, who then got in touch with the RSPCA.

Bizarrely, a tweet to ‘RSPCA Frontline’ just two days later also reported spotting a deer close to the city centre.  Perhaps it had taken a wrong turn on a stag-do?