Universities and Science Minister David Willetts visited Jodrell Bank Observatory yesterday to get a flavour of the world-leading astronomical research at the site. 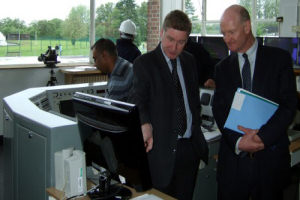 Mr Willetts was invited by David Rutley, MP for Macclesfield, and took a trip up the iconic Lovell Telescope to see close-up the radio astronomy the vast dish carries out.

In addition, he toured the Discovery Centre and spoke to astronomers at Jodrell Bank, part of The University of Manchester, and learned about the array of projects they are involved in.

One of these is the Square Kilometre Array (SKA)– the world’s largest and most sensitive radio telescope, capable of helping answer questions about the early formation of the Universe.

The SKA headquarters will be located at Jodrell Bank, and the array of telescopes will be in Australia and South Africa.

Another project Mr Willetts inspected is e-MERLIN, a powerful new array of radio telescopes which is allowing astronomers to address key questions relating to the origin and evolution of galaxies, stars and planets.

Last week the Olympic Torch visited Jodrell, and was taken to the top of the Lovell Telescope by comedian John Bishop.

Jodrell Bank Associate Director Dr Tim O’Brien said: “We were very pleased to welcome the Minister on his first visit to the Observatory.

“He very much enjoyed climbing up into the bowl of the iconic Lovell Telescope and hearing about some of the research it is doing along with other telescopes in our e-MERLIN array.

“We also discussed the UK’s major role in the project to build the world’s biggest telescope, the Square Kilometre Array.”