Kids' hero is pride of University

A member of staff at The University of Manchester, who remortgaged his house to set up a children’s centre in Hulme, has been honoured by the University. 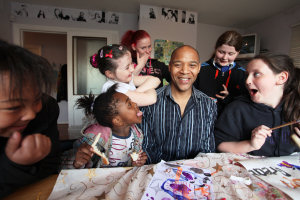 Lenox Green and his wife Heather have spent six evenings a week for the past eight years helping young people have fun in a safe environment, get good advice on a range of issues and achieve their potential.

Lenox has now been recognised at the University’s Social Responsibility and Volunteer of the Year Awards, an event which celebrates the amazing staff, students and alumni who go the extra mile for those less fortunate.

Lenox, a postgraduate office administrator in the School of Mathematics, is so well loved that when a local burglar broke into the centre, his mates made him take the loot back.

“They’re good kids,” he says. “And I get a lot out of it too – every month I get one of those magic moments. Only last week, at the end of the evening a four-year-old girl was waiting for her parents to pick her up and came into the table tennis room where the older kids normally play. I asked her if she wanted a go, she nodded her head, picked up the bat and for the first time in her life played table tennis; the look on her face was priceless. I see that all the time. It’s as simple as that really.”

Lenox started in his teens by helping with youth projects, summer camps and soup runs in China town then progressed to inviting homeless people round for meals. Then, 19 years ago, when he met and married Heather, they started running a drugs rehab centre from their home, as well as supporting recovering addicts in rehab centres and youth hostels.

They opened the Rainbow Christian Centre in 2003 to help addicts but, after speaking with locals, focused their attention on preventing addiction and the associated behaviour that led to it. Available 24 hours a day – Lenox has only taken one five-day holiday in 19 years – their projects include a gym for adults, youth groups, food handouts, Saturday social events, prison visiting, court appearances, family liaison and advice on housing, benefits, education, apprenticeships and debt. And in August of each year, he takes a week off work to run a play scheme.

The other award winners include student winner Jack Burke, who not only runs the Student Action soup kitchen, but has fought for its very survival.

BA History student Jack and his team prepare and deliver fresh food and drinks in a safe place where the homeless can share their concerns and problems. In addition, his detailed knowledge of the services available – obtained by various means, including meetings with members of the city council – makes a huge difference to those he helps.

And with the council constantly trying to move the soup kitchen out of the city centre, he has spent much of his own time looking at other possible venues, to ensure that it is in a safe place for both volunteers and homeless alike.

If that was not enough, Jack has successfully completed the BOGLE Stroll 55-mile walk twice to raise funds to enhance the soup kitchen.

Alumni winner Estelle Goodwin, who studied for her MA in Ancient World Studies here, founded the charity KIN (Kibera in Need) which supports projects in the vast Kibera slum in Kenya.

Kibera, in Nairobi, is home to up to one million people who live in desperate conditions of poor housing and sanitation, high unemployment, HIV/Aids and low school attendance.

KIN started out helping the Kenyan NGO Riziki fund its small feeding programme, in which 50 Kibera residents got their main weekend meal every Saturday.

It has now developed an Education Support Scheme, a Child Guardianship Scheme, Microfinance and a series of seminars giving guidance on parenting, reproductive health and career choice; funds vocational training for around 220 children and young people; helps 800 plus small business clients; and is about to start a solar lighting project.

And the feeding programme has grown to 200 children and caregivers every week.

President and Vice-Chancellor of The University of Manchester, Professor Dame Nancy Rothwell, presented the awards. She told the award winners: “You give up the most valuable thing to all of us and that is time.”