The world’s largest working steam mill engine was transformed into a gigantic instrument at a unique concert this bank holiday weekend (Sunday 3 June). 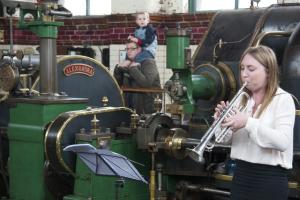 While the public looked on, the musicians –also from the University-  played the piece in two parts at positions dotted around the engine.

They began with a fanfare, increasing in speed as the 85-ton fly wheel -  which is as big as a house  - gradually roared into life.

He said: “The piece is a celebration of the incredible power and beauty of the Ellenroad engine, which will itself become an essential part of the ensemble.

“The spirit of the music is linked with the rhythm of the engine, amplifying its physical workings and moving parts as it gathers speed, reaches an optimum power and finally comes to rest.

“The idea is to create a musical whole out of the engine’s sonic and visual character, but the project is also about taking classical music out of the concert hall and into other environments.

“Lancashire has a rich culture firmly rooted in its industrial heritage, and although it is not my own heritage I was deeply impressed by the passion of the volunteers at Ellenroad, as well as the power of the engine.

“The fanfare aims to reflect some of the solemnity of the loss of such a great industry, as well as the glory of the engine."

His supervisor, music lecturer Dr Richard Whalley said: “It really takes your breath away to see the Ellenroad engine in action.

“So the idea of having musicians playing alongside it, as if the engine itself is a huge musical instrument in its own right is very exciting.

“The staff at Ellenroad have been an absolute pleasure to work with, such is their enthusiasm, and I’m confident Simon has the talent and inspiration to make something spectacular happen.”

In 1985, the mill closed and was largely demolished, leaving only the engine and boiler houses. It was saved by the Ellenroad Trust in 1986.

“We’ve been opening on the first Sunday of every month for many years-  but I can’t remember anything as unusual as this.

“Many thanks to Simon and Richard for thinking of us.

“It will be a bonus to our society’s members and volunteers who give their time and effort to make this place work and open for the public to enjoy.