Win the filming and editing resources to make your own video - entries invited by 29 June. 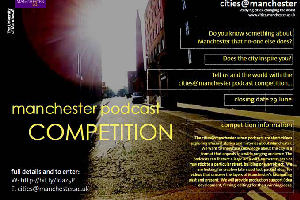 If that inspires you, we are running a competition to win the filming and editing resources to make your own video – details below. If it works well, we hope to run it again next year on a bigger scale.

Do you know something about Manchester that no-one else does? Have you discovered something unusual? Does the city inspire you? Tell us and the world through our Manchester podcast competition.

What are the cities@manchester Manchester podcasts?

The cities@manchester podcasts are short videos exploring unusual stories and histories about Manchester. The aim is to showcase university-based knowledge about the city in an interactive, dynamic format that will appeal to a diverse audience. The podcasts can feature a large area with numerous sites or may stick to a particular street, building or even object. We want original bite-sized fact-packed videos that uncover the layers of Manchester’s fascinating past and present.

Our very first podcast, Engels, Oxford Road, and the origins of radical thought, can be used as an example.

What do you need to do to enter?

The prize and how it works

We have three prizes. If selected, you win the resources to make your idea a reality:

For all queries, please email: