“We need more than peace to stop the wars”

A new film launched on Thursday (24 May) co-curated by a University of Manchester lecturer and shown at the prestigious Imperial War Museum in London, is to argue that winning the peace is just as important as winning the war. 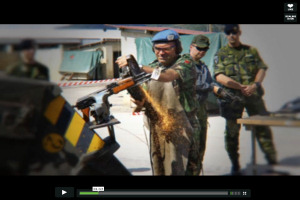 Dr Tim Jacoby, who is a senior lecturer in conflict studies, says more people should be aware that the violence did not stop after the signing of ceasefire agreements in Iraq, Northern Ireland, Sierra Leone, El Salvador and Kosovo.

Part of the Cultural Olympiad, the film is inspired by an Olympic Games ‘Truce’, created in the ninth century BC to enable athletes from Greece’s warring cities to travel and compete in safety.

Highlights of the film include extracts from interviews with former prisoners Seanna Walsh of the IRA and Jackie McDonald of the UDA, both now involved in Northern Irish peace initiatives.

Courtny Edwards, who worked with a NGO health service in displaced persons’ camps following civil war in Sierra Leone before completing a Masters degree at the University’s Institute for Development Policy and Management is in the film.

Professor Tony Redmond from The University of Manchester, who led aid teams in Kosovo following NATO attacks in 1999 also speaks.

The stories draw attention to the notion of truce as an international convention, and the efforts of individuals to broker or to break permanent peace.

It is also curated by Catherine Roberts from the Imperial War Museum.

Build the Truce will also be a key element of the summer programme of IWM North in Manchester as part of the Big Picture Show – an immersive, multi-panelled presentation of interview excerpts and footage from July.

As the lights go down, footage and images will be projected onto a 27 foot high walls around the Main Exhibition Space, taking visitors into the heart of the action.

Dr Jacoby is Senior Lecturer at the Institute for Development Policy and Management and co-founder of the Humanitarian and Conflict Response Institute at The University of Manchester and has many years experience living and working in conflict-affected countries.

Much of his research has been carried out in Turkey where intermittent truces between the government and Kurdish insurgents have dominated the political landscape for decades.

He said: “Conflicts in many places have - at a superficial level - been ended over recent years.

“But the problem is, the underlying problems which caused the war in the first place are not resolved- and that often means violence can continue.

“Demobilisation efforts are often impaired by the fact that there are no jobs and no prospect of addressing the needs of a traumatised public.

“As a result, crime and violence are still able to flourish - sometimes at levels comparable to the recently ended conflict.

He added: “Through the film, we challenge the prevailing view that bringing an end to war represents a resolution of the cause of war.

“It is inspired by people living and working in the aftermath of conflict based on interviews with civilians, ex-combatants  and aid workers.”

“They witnessed conflict and truce in Iraq, Northern Ireland, Sierra Leone, El Salvador and Kosovo and share their perspectives on how we move away from, or towards, peace.”