Saving the planet, one microwave at a time

The vast majority of the millions of microwave ovens thrown away every year could be easily fixed and reused, according to University of Manchester research. 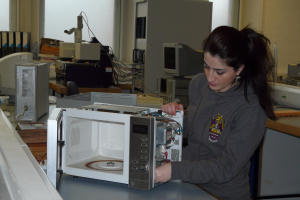 Making simple repairs could save the UK could save millions of pounds by replacing fuses or plugs rather than throwing away perfectly reusable microwaves with brand new ones.

Published in the Journal of Cleaner Production, PhD student Azadeh Dindarian and her team examined 189 microwaves at refuse centres and found that 54% of microwaves in a single year appeared to be disposed of simply for cosmetic reasons or because they had minor faults, and that 85% could be safely repaired. They have also found that some simple changes in design could prevent some of these faults from happening altogether.

Finding ways to re-use discarded microwaves could help to prevent thousands of tonnes of waste every year. These devices are often shredded in specialist recycling centres which are not often capable of retrieving valuable materials.

Azadeh, who was shortlisted to present her research at the House of Commons, believes product reuse is essential to reduce current levels of waste and create a more sustainable economy.

Barry Sheerman, MP for Huddersfield and Chairman of policy connect, added: “The excellent and compelling work carried out by the School of Electrical and Electronic Engineering is persuasive in demonstrating that many microwaves that are discarded could be reused or remanufactured, saving money, and crucially, natural resources.”

Azadeh, 29, who is in the final year of her PhD in Electrical and Electronic Engineering, was supervised on her project by Professor Andrew Gibson, and Dr Joao Quariguasi Frota Neto.

The researchers now plan to extend the research to include washing machines, fridges and other devices to reveal the full scale of appliance waste in the UK.

Azadeh said: “Our research shows that the vast majority of dumped microwaves and other white goods could easily be re-used, however unwanted functional products tend to end up being wasted rather than being disposed of through alternative routes.”

In the UK alone, nearly one million tonnes of electronic waste is generated per year and worldwide the volume is estimated at between 20 and 50 million tonnes, and to be growing at a rate of 4% per year.

Professor Gibson said: “Azadeh is working on a pioneering research project concerning the sustainability of core materials for the manufacture of electrical and electronic equipment.

“For the first time, a study is underway to look at the quality of disposed electrical goods. The results we have so far obtained are surprising in that the majority of disposed microwave ovens are either fully functional or easily repaired. The hard practical fault-finding data is what makes this project unique.”

Dr David Evans of the Sustainable Consumption Institute at The University of Manchester added: "Discarded electrical equipment is a significant and growing source of global waste and one that it is important for academic research to engage with.

“This work and the ongoing research invites us to think differently about sustainable end-of-life solutions for electrical equipment whilst asking important questions about the relationships between waste policy, product design and household behaviour".