Cities must adapt to our changing climate, say leaders

UK cities must take more urgent and integrated action to adapt to our changing climate, according to some of the region's leading businesses and public sector representatives. 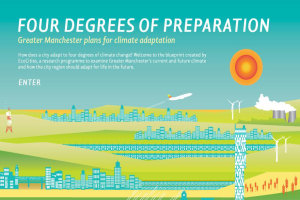 Bruntwood, one of the UK’s leading property companies, and The University of Manchester today (Monday 14 May) host a symposium to discuss the first phase of their EcoCities project; a long-term partnership looking at how cities should adapt to the changing climate.

What was once a worst case scenario on future climate, a 4° increase in global temperature, is now looking more and more likely. An increase in the annual mean temperature of our cities will drive greater seasonal variations in the weather and more extreme events such as storms and flooding.

Greater Manchester has been the case study for the EcoCities project and has found that the city is already seeing its weather and climate change. Temperatures are increasing, and seasonal patterns of rainfall are changing. Under high greenhouse gas emissions scenarios, Greater Manchester in 2050 could see its temperature increased by up to 3.6°C, with winters 36% wetter and summers 36% drier. This has implications on everything from flood damage to homes and business properties and the increased costs of cooling commercial buildings, hospitals and schools to the scarcity of green spaces and adapting infrastructure.

The Adapting the City symposium will address three key themes for climate adaptation in our cities:

Michael Oglesby, CBE, Chair of Bruntwood, said: “UK industry has a strong imperative to tackle climate adaptation, and to do so before it is too late. Our concern is that the prevailing economic conditions will mean that action is put off until times are better. Not only are the social and environmental reasons for tackling this issue clear, but there is also a compelling business argument.  It is essential that we address climate problems ourselves and come up with our own technology and manufacture it in the UK.”

Sir Richard Leese, Leader of Manchester City Council, added: “I’m proud that Greater Manchester is leading the way on such an important issue, and one that has the potential to impact hugely on people’s everyday lives, our public services, our businesses’ productivity and our city’s infrastructure. I hope that the EcoCities project – in showing the way forward for an integrated approach to climate adaptation – will offer other cities, both within the UK and further afield, some best practice solutions to this seemingly most intractable of issues. We must widen this debate to ensure that everyone who has an interest in this area now takes part in both the debate and in arriving at practical solutions. No one has a monopoly of ideas in this field.”

The EcoCities project has enhanced capacity for individuals and organisations to take action to adapt Greater Manchester to the changing climate, and hopes to become a source of information and best practice guidance to other cities both across the UK and further afield.

The summit marks the start of the process to find practical and economically viable solutions of how climate adaptation can, and should, happen at a number of levels: individual building, local community, and strategic city-level region.

In order to do this the EcoCities project team has widened the discussion to incorporate other stakeholders. Representatives from Arup, Drivers Jonas Deloitte and the Association of Greater Manchester Authorities (AGMA) will all be speaking at today’s summit and will be involved in finding the solutions and implementing them.