A third year University of Manchester music student has signed up with one of the world’s leading music agencies Intermusica. 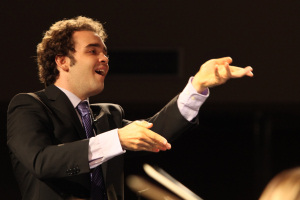 Jamie Phillips, who graduates in 2012, has also been invited to conduct a concert at the 2013 Salzburg Festival - one of classical music’s most prestigious events. He was given the opportunity after achieving second place in the 2012 Nestlé and Salzburg Festival Young Conductors’ competition.

Jamie will also be one of the finalists in auditions to find Sir Mark Elder’s new assistant conductor of the Hallé Orchestra.

Adding to the music department’s success, 2010 Manchester graduate Duncan Ward is celebrating the news he is to assist the world’s best known conductor Sir Simon Rattle in a concert performance of Wagner’s Die Walküre with the Berlin Philharmoniker.

Duncan is already on the books of Askonas Holt, the agency that represents Sir Simon Rattle and Daniel Barenboim. He has worked with both conductors.

Earlier this year he made his debut with the Royal Scottish National Orchestra and in June he will appear with the Bamberg Symphony in Germany.

Both conductors are both products of the University’s elite conducting programme taught by Mark Heron, and are set to follow in the footsteps of other star alumni conductors, including Mark Wigglesworth and Paul McCreesh.

Jamie Phillips said: "I was so happy to perform in the Nestle and Salzburg Young Conductors Award in April - the opportunity to conduct in such a world-famous venue with an incredible orchestra was an amazing experience.

“I feel really honoured to have been invited back to conduct the Camerata Salzburg at the 2013 Salzburg Festival and I feel very privileged to be invited to perform at such a prestigious event."

He added: "The conducting opportunities at The University of Manchester are unrivalled anywhere else in the UK - the chance to have so much contact time with ensembles with the guidance of expert teaching is fundamental to developing skills required to stand in front of musicians with confidence."

Dr Rebecca Herissone, Head of Music at The University of Manchester, said: “We are absolutely delighted the department’s current and former conducting students are having such an impact internationally, and that we have been able to create an environment that has helped them break into this highly competitive career.

“Both of these young conductors have enjoyed the unique opportunities available to student conductors in Manchester.

“The combination of tuition and guidance, together with significant opportunities to conduct a wide range of orchestras and ensembles in very diverse repertoires is unrivalled in an undergraduate context.”

Mark Heron said “Given their age, Duncan and Jamie’s achievements are unparalleled, and credit must go to the music department at Manchester for having the vision to create an environment in which their undoubted natural ability has been able to develop so rapidly.

“Of course, having such talented conducting students has a very positive impact on the quality of music-making on offer to all of the students who play in the University orchestras and ensembles.”