Find A Better Way, the charity founded by Sir Bobby Charlton to improve the lives of individuals and communities around the world affected by landmines, will host a visit of prominent Westminster MPs at the University of Manchester today. 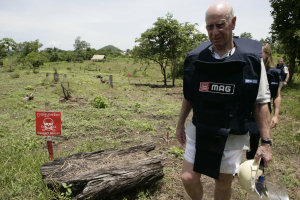 The All Party Parliamentary Group on Landmines will visit the headquarters of the Mines Advisory Group (MAG) and The University of Manchester to discover more about the humanitarian research into better methods of detecting landmines.

The new All Party Parliamentary Group on Landmines and Unexploded Weapons of Conflict consists of twenty-six concerned Members of the House of Commons and the House of Lords. The formation of the group followed a 2011 report which revealed that the use of anti-personnel mines by states is at a seven-year high.

Manchester is a centre for the fight to improve the lives of those affected by landmines. Find A Better Way and its partners, (The University of Manchester, MAG, Lancaster University and Rapiscan Systems), hope that the region’s culture of innovation can help battle a problem that continues to kill and maim thousands of innocent people every year and leaves entire communities living in fear.

The University of Manchester is currently conducting research projects into creating better methods of detecting landmines. The research teams are hoping to develop smarter equipment that can distinguish between the tiny bits of metal in a landmine and all other sorts of metallic debris and rubbish buried in areas where landmines are found.

Rob White, Director of Operations at MAG, said: “The ambition and innovation shown by Find A Better Way research projects at the University of Manchester have the potential to significantly improve the way humanitarian landmine detection is conducted. If we can make the process of locating landmines faster and cheaper, the future lives of post conflict communities throughout the world will be freed from the fear of living with these weapons of terror”.

Sir Bobby visited Cambodia in 2007 and witnessed first hand the devastating impact that landmines have on those who live in areas littered with these hidden threats. He learned that the current humanitarian landmine detection methods are based on techniques that have seen little change since the Second World War.  On his return to Manchester he was inspired to create a team capable of finding a better way to improve the lives of the people who continue to be threatened by these deadly remnants of war and the charity ‘Find A Better Way’ charity was conceived.