The science of poetry

For most engineers and scientists, wandering lonely as a cloud or being compared to a summer rose are not phrases which normally enter their minds. 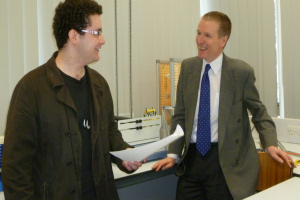 But University of Manchester science and engineering students, usually preoccupied with more prosaic matters, have been showing their poetic sides by turning their hands to verse.

An Engineering and Physical Sciences poetry competition at the University attracted more than 150 entries from students more used to equations and experiments than sonnets and stanzas.

Organiser Dr Peter Fenn, a Senior Lecturer in the School of Mechanical, Aerospace and Civil Engineering teamed up with John Mcauliffe, Reader in Creative Writing from the School of Arts, Histories and Cultures to shortlist 166 entries down to 35.

These were then judged by poets Wendy Cope and Lachlan Mackinnon who picked the winner and runners up.

The winning effort came from Physics with Theoretical Physics undergraduate Peter Thompson, 21, from Liverpool, with an untitled poem.

We catalogue the agents of our kind,
We grind the lens, bring focus to our fears,
With Feynman lines and spirals map the mind,
Still burning is the flame of that idea,

Once stole in fennel stalk from ancient night,
To read the mind of god beneath its light.

There has always been a close relationship between science and art – physicist and novelist  C P Snow famously argued in his ‘Two Cultures’ lecture, that the breakdown of communication between the two cultures of Science and Humanities was a major hindrance to solving the world's problems.

Some years later the Engineering Council placed and advertisement in The Times which read: ‘Why isn’t there an Engineers Corner in Westminster Abbey?  In Britain we have made more fuss of a ballad than a blueprint.’

Professor Colin Bailey, Vice President and Dean of the Faculty of Engineering and Physical Sciences, said: “The art of engineering and science is critical to address the global challenges facing society.

“It is important that our engineering and science students develop their creativity to obtain the skills to address these challenges.  This initiative allowed students to express their ideas through the medium of poetry and I was particularly pleased that 166 students decided to enter the competition, with the quality of the poems being extremely high. "

John Mcauliffe added: “Reading the poems was fascinating: science and wonder combined in the best poems, but the 166 poems, a big entry for a competition confined to a single faculty, also offered a real sense of the students’ multicultural backgrounds, of how their own individual interests shape their studies of the sciences and engineering.’

The poems from the three runners up, and a link to all the other entries, are available at http://www.eps.manchester.ac.uk/science-for-all/science-poetry/