The University of Manchester will this year host the biggest event in the history of Computer Science to celebrate the centenary of Alan Turing, the father of the modern computer. 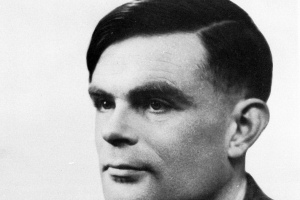 Leading speakers from all over the world will descend on Manchester from June 22nd to 25th to honour the renowned code-breaker, mathematician and computer scientist.

The Alan Turing Centenary Conference will be held at The University of Manchester and Manchester Town Hall, featuring three days of lectures and panel discussions.

Topics to be discussed at the conference will include how Turing’s legacy has endured in the digital age, as well as what the future holds for computing and Computer Science.

There will also be two public lectures touching on the extent of Turing’s legacy.

Alan Turing joined The University of Manchester in 1948, the same year that Tom Kilburn and Freddie Williams built the Baby at the University – the world’s first computer with memory stored programs.

Although his genius was most recognised in the UK for his work breaking German codes during the Second World War, Turing was very much the father of the modern computer.

He envisaged a 'universal computing machine', whose function could effortlessly be transformed from word processor to desk calculator to chess opponent – or anything else that we have the skill to pin down in the form of a computer program.

Turing was also one of the first pioneers in Artificial Intelligence, Computation Theory and Computer Games. He also made profound contributions to mathematics and mathematical logic, philosophy, theoretical biology, and the study of the mind. He remained at The University of Manchester for the rest of his life.

At the turn of the Millennium, 45 years after his death, Time magazine listed him among the twentieth century's 100 greatest minds, alongside the Wright brothers, Albert Einstein, DNA busters Crick and Watson, and the discoverer of penicillin, Alexander Fleming.

The conference is intended to be a celebration of Turing’s life and his time at The University of Manchester, but also to bring together the most distinguished scientists, to understand and analyse the history and development of Computer Science and Artificial Intelligence.

In addition, the conference will feature a computer chess event, a poster session, and a competition of computer programmes proving theorems.

Dr Ferrucci said he was honoured to be asked to speak at the conference. He added: “Alan Turing left us with a remarkably inviting, essential and universally stimulating challenge – can computers exhibit a thinking and communicating behaviour so similar to ours that it would be ostensibly indistinguishable? The challenge turns out to be harder than anyone ever imagined.”
Another speaker, computing pioneer Sir Tony Hoare, added: “I was attracted to computing by its relevance for philosophical questions like the scope and limits of human understanding.

“Turing's pursuit of artificial intelligence surely had the same motivation. That is why the question I address at the Turing Centenary Conference is 'Can computers understand their own programs?’.”
Conference organiser Professor Andrei Voronkov said: “If you search the Web for terms morphogenesis, Turing test and Turing machine, you will see why Alan Turing is arguably the most famous computer scientist of all time.

“To celebrate his centenary and his work at The University of Manchester we decided to organise a conference to remember, aimed at pushing forward our understanding of the most fundamental and important issues in the information science and artificial intelligence, including the nature of human mind, the possibilities and limits of artificial intelligence, and the role and the nature of mathematics in them.

“The result is a set of speakers unmatched in the history of computing.”

The first public lecture, delivered by Jack Copeland, one of Turing’s biographers, entitled ‘Alan Turing: Pioneer of the Information Age’ will be held at University Place at The University of Manchester at 6.30pm on Friday 22nd June. The second, ‘The Problem of Modelling the Mathematical Mind’ by physicist Sir Roger Penrose, is on Monday 25th June at 8pm at Manchester Town Hall.

To book free tickets for the public lectures and for more information on the conference, including a detailed schedule of events, please visit http://www.turing100.manchester.ac.uk/