UMSU has been named as a Gold winner at the NUS Green Impact Awards in Manchester. 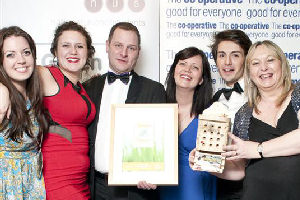 The awards are part of the NUS Green Impact initiative which provides environmental accreditation for students’ unions and helps them to showcase great environmental practice. This year saw a record 105 unions competing in nine categories.

UMSU won its award for excellent practice in environmental and sustainability throughout the organisation.

The awards were presented on 4 April 2012 at the end of the NUS Services Convention and AGM at the Manchester Mercure Piccadilly Hotel.

Letty Newton, General Secretary of the Students’ Union, said, "This signals the change that Manchester has undergone in the last twelve months. To get this award in such a short period shows how important this is to the organisation and demonstrates our organisational commitment as well as the commitment of the individuals that made this happen. We are delighted."

Dannie Grufferty, NUS Vice-President (Society and Citizenship), said, "The quality of the entries for this year’s awards was exceptional and all the winners should be very proud of themselves. They’ve set a great example for those around them and have made real progress for environmental sustainability.

"Students' unions have often long been at the forefront of environmental campaigning and since 2005 NUS Green Impact has been helping students’ unions to green themselves, their universities and their communities."

For more information about the Green Impact awards, visit: