A University of Manchester lecturer is in line to win both of Science Fiction’s most coveted accolades after being placed on the final ballots for a both the Hugo and Nebula awards for his novelette ‘What We Found’. 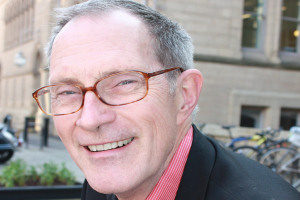 Geoff Ryman hopes to join the list of previous Hugo novelette winners, including Brian Aldiss in 1979,  Richard Cowper in 1977 and Ursula Le Guin in 1973 when the result is announced in front of 20,000 SF fans at the world SF convention August.

The work has also made the final ballot for the Nebula Awards - another major American SF honour ,which will be announced in May.

Previous Nebula winners include Brian Aldiss in 1966 and Arthur C. Clarke in 1973.

First published in The Magazine of Science Fiction, Sept/Oct 2011, the novelette is about a scientific breakthrough by a Nigerian scientist, and the deep personal impact it has on how he understands his own family history … from independence to the future in 2030.

The Hugo awards, named after pioneering science fiction magazine Amazing Stories founder Hugo Gernsback, have been given every year since 1953.

Nominees and winners are chosen by members of Worldcon, the annual convention of the World Science Fiction Society in August.

The Nebula awards have been given each year since 1965 by the Science Fiction and Fantasy Writers of America.

Nebula Award nominees and winners are chosen by members of the SFWA, though the authors of the nominees do not need to be a member.

Ryman is based at the University’s Centre for New Writing.

He said: “I’m delighted and proud that What We Found has been nominated for both the Hugo Award and Nebula in the Best Novelette categories.

It’s made especially fine me in that one of my fellow nominees for the Hugo is an ex-student of mine, Ferret Steinmetz.

“The Hugo is the award that fans rather than professionals vote on and nominate for – so it’s fantastic feedback from SF readers.

“The Nebula is one’s colleagues nominating and voting.  Both sides of the SF equation readers and writers get involved in the awards.  It says something about the collegiate nature of the whole SF endeavour."