University of Manchester student, Blaire Hannan, has been named as one of 8,000 inspirational people to carry the Olympic Flame during the Torch Relay. 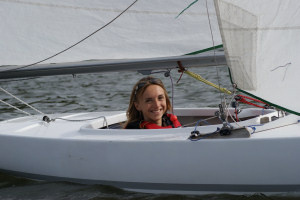 Blaire will be the last person to carry the Olympic Flame on 22 May, for the one-mile journey from Benjamin Perry’s pontoon at Redcliffe to the Millennium Square in her hometown of Bristol.

Once there, she will carry the flame onto the stage where thousands of people are expected to gather to celebrate its arrival.

Blaire, a first-year Speech and Language Therapy student, a TASS athlete and a member of the Paralympic transitional squad for Sailing, will be transporting the Olympic Flame on the ‘Aiming High’ wheelchair accessible power boat along Bristol Floating Harbour.

Blaire said: “It is a massive privilege to be part of the greatest sporting event in the world and represent Paralympic Sailing, but to get the rare opportunity to carry the flame by boat in the famous maritime city of Bristol, just makes it extra special.”

Blaire was nominated as a Torch Bearer by Bristol City Council for achievements in competitive sailing after suffering from a rare neurological and muscular condition called Dystonia, which has left her wheel chair bound.

It is also in recognition of her work with Bristol Sailability, a voluntary organisation which enables young disabled people to experience water based activities including Sailing.

Blaire said: “Bristol Sailability are very close to my heart as without them I wouldn’t have been able to achieve what I have in Sailing. Naturally I am very nervous but I have had some time now to get my head around it and I am hoping on the day I will be able to relax and enjoy the experience.”

The Torch Relay will be a highlight of a very busy summer for Blaire who is training hard for a packed calendar of Sailing events coming up including a National Ranker in April.

“It is a very busy summer for me and although I was unable to secure my place on the GB Paralympic Team, this time round, I now have my sights well and truly set on the 2016 Games.”