Manchester students are hoping to raise £50,000 for charity with this year’s annual 55-mile Bogle Stroll. 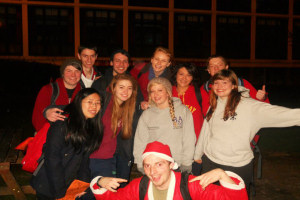 Each year hundreds of determined students set out to walk 55 miles around Greater Manchester to raise valuable funds for charities close to their hearts.

Launched in 1961, Bogle has been a centre piece for the student calendar for over five decades.

The event is completely organised and managed by students who are juggling coursework, lectures, dissertations and revision with planning an event which raises thousands of pounds every year

In recent years the quickest recorded time to complete the full 55 mile route is a little over 14 hours, though the average completion time is closer to 21 hours.

The route takes the form of two loops; the first is the 29 mile southern loop bringing walkers to Manchester Airport and through Stockport before taking them back to the University of Manchester North Campus, adjacent to Piccadilly Station. The second takes in the north of Manchester by heading out on Oldham Road and then continuing north through Prestwich and Farnworth, before finally returning through Salford.

Only about 55% of those who start the event actually make it the full distance to the finishing line.

Each person who signs up to the event commits to raise a minimum of £60 for a charity of their choice, though the organisers hope that, given the scale of the challenge, friends and family will be generous enough to give a lot more.  This year more than 500 people are expected to take part in the walk.

Although the event is organised by students, anyone is welcome to take part and to help raise awareness of the event throughout the Greater Manchester population.

The Children’s Society has been nominated as this year’s Charity of the Year.  Bogle organiser Tom Bartley said: “Students often get a bad press, so part of the aim of the walk is to demonstrate that we can be very hard-working and determined to do good for the community. The Children’s Society does an incredible job with children and young people throughout the UK and has several programmes and centres within Greater Manchester, making them the perfect partner for this year’s event.”

The President and Vice-Chancellor of The University of Manchester, Professor Dame Nancy Rothwell, said: “Bogle has been a highlight of Manchester’s calendar since 1951, and thousands of our students have helped to raise millions of pounds for charity. They all put in a tremendous amount of hard work and effort to raise money for worthy causes every year. I am particularly pleased that the organisers have nominated The Children’s Society as their Charity of the Year, and wish them every success with their fundraising in 2012, and their blisters!”

"Our research reveals that as many as 5,000 children run away from home or care in the Greater Manchester area alone every year. With money raised from the Bogle 2012, we can continue to support some of the most disadvantaged children in the area. I am taking part in the Bogle and hope others will join me to raise as much money as possible."

If 55 miles sounds like too much of a challenge there are also some smaller events taking place simultaneously; a 26-mile and a 12-mile mile walk and a 78-mile cycle, with about 20% of people signing up to take part will choose one of these options.

This year’s Bogle takes place on Friday 2nd – Saturday 3rd March and people can sign up at www.bogle.org.uk.