Tool is new weapon in fight against climate change

A new service, developed by experts at The University of Manchester and The Mersey Forest, will provide vital information to help urban neighbourhoods avoid the potentially dangerous effects of climate change. 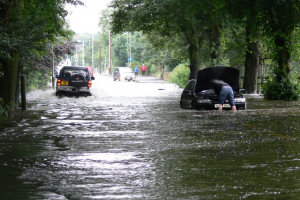 The unique aid, launched this month online, will allow planners, policy makers, local people and developers to assess if new buildings and roads will make neighbourhoods intolerably hot or more likely to suffer from flooding.

It will also give cities the ability to assess how green infrastructure – such as trees, vegetation, waterways and lakes - can help neighbourhoods adapt to climate change by cooling surface temperatures and reducing runoff.

Heatwaves, river and surface water and flooding are already a major threat to many cities which have not adapted to extreme weather events, argues Dr Gina Cavan, from the University’s Centre for Urban Regional Ecology (CURE).

In one example, many of the 52,000 lives lost during the European summer heatwave of 2003 were in urban areas, which are warmer than the surrounding countryside, partly as a result of there being less cooling vegetation.

The tool - called STAR –produces temperature and runoff scenarios based on parameters entered by the user within a defined study area.

It is the latest product of a collaboration between eight European Union member states aimed at helping cities adapt to the effects of climate change called GRABS.

Led by the Town and Country Planning Association (TCPA), GRABS works with local authorities to raise awareness and devise responses to the impact of climate change.

“City authorities cannot afford to ignore the environmental impact of land use if they are to adapt to the potentially dangerous effects of climate change,” said Dr Cavan.

"Greening the city is not just about coping with climate change, but also has health, social and economic benefits too.

“Even if the rise in CO2 emissions were stopped tomorrow, extreme surface temperatures and endemic flooding will be an increasing problem in cities by the middle of this century unless something is done.

“But cities can lessen these threats by increasing the amount of their green infrastructure and the data produced by the STAR tool will help them do that.”

The tool will also help local communities develop their own neighbourhood plans under the Government’s localism agenda and help them ensure the right development happens in the right places.

Developers could also use the tool to test their own development proposals’ green credentials.

Dr Susannah Gill is from The Mersey Forest and is also a honorary research fellow at The University of Manchester.

She added: “This tool is best used at a neighbourhood scale.

“It tests the impact of different land cover scenarios of greening and development on surface temperatures and runoff under different temperature and precipitation conditions.

“The tool can be used for any area within the UK, though users in North West England are given up to date data on current land use and future climate change projections.”