Site of earliest house is scheduled by the Government

One of Yorkshire’s most outstanding historical sites has been given protection by Heritage Minister John Penrose. 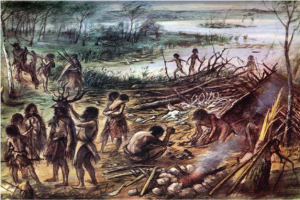 On the advice of English Heritage, the early Mesolithic site Star Carr, North Yorkshire is being made a scheduled monument for its rarity and archaeological importance.

The announcement follows last year’s discovery of Britain's earliest surviving house by a team of archaeologists from the Universities of Manchester and York at the site.

The houses dates to at least 8,500 BC - when Britain was part of continental Europe.

The research team unearthed the 3.5 metres circular structure next to an ancient lake at the site, near Scarborough, which archaeologists say is comparable in importance to Stonehenge.

They also excavated a well preserved 11,000 year-old tree trunk  with its bark still intact and the earliest evidence of carpentry in Europe.

Dr Conneller said: “The scheduling of Star Carr confirms its position as Britain's most important Mesolithic site. We are delighted that the finds from our excavations - in particular the house and the wooden platform - have increased our understanding of such an iconic site.”

Dr Milner added: “It is great news that the national importance of Star Carr has been officially recognised and it will now be legally protected. We are really looking forward to carrying out further excavations which will help us answer more questions about how our ancestors lived, just after the end of the Ice Age.”

John Penrose said: “The diversity of finds on offer at Star Carr and its history which goes back to 9000 BC are unequalled in British archaeology and it remains one of the most important Mesolithic sites in Europe.”

Nick Bridgland, Designation Team Leader for the North at English Heritage, said: “The remains at Star Carr, including what may  be the earliest building known in Britain, are unequalled in British archaeology and designation as a Scheduled Ancient Monument recognises this importance. Scheduling Star Carr will help archaeologists manage the site effectively and carry out critically important excavations to recover the rapidly decaying remains so we can all learn as much as possible about this fascinating period of prehistory.”

The research at Star Carr was made possible by a grant from the Natural Environment Research Council, early excavation funding from the British Academy, and from English Heritage. The Vale of Pickering Research Trust has also provided support for the excavation works.